The Big Science News today is that Korean scientists have cloned a dog -- to be exact, a rather handsome Afghan.

This is all very interesting, but other than the anti- cloning tizzy that it has thrown Bay Area animal activists into-- I'll try to find a link-- one of the interesting aspects is how self- elected "experts" have weighed in on how dumb a choice the Afghan is.

Says one, shrink and pop dog author Stanley Coren: "The Afghan hound is not a particularly intelligent dog, but it is beautiful." He ranked the Afghan hound last among 119 breeds in temperament and trainability."Many people who opt for the cloning technique are more interested in fashionable looks," he said. "Whenever we breed dogs for looks and ignore behavior, we have suffered."

Actually I would agree with him that far-- but he may be picking the wrong breed for the wrong reason. The modern show Afghan may be a shadow of its Asian ancestors, but the primitive wolflike habits and physiologies of the Middle Eastern and Central Asian sighthounds, which I have hunted with for twenty five years, do not easily lend themselves to simple analysis. They are not robotic, while some "intelligent" breeds like Labs can be.

My friend Dr. John Burchard, who studied at the Max Planck Institute and under Konrad Lorenz, and who has worked with salukis and falcons for forty- plus years, put it this way today: "In general the dogs that score highest for obedience, and thus for "intelligence" in Coren's system, do worst at problem solving. The best problem solvers seem to be wolves -- and Basenjis, who score very low in Coren's scheme. Don't know if anybody's tried sighthounds on the problem solving tests ... but those of us who live with them can't help noticing certain things..."

(One of our sighthound group describes a cartoon in which a bespectacled scientist stands at the top of a cliff demanding that a recalcitrant Afghan "Jump!". Below the ground is littered with the corpses of Labs, collies, shepherds....) 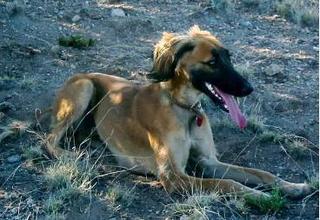 UPDATE: A few more comments from primitive dog aficionado friends-- both scientists incidentally. Vladimir Beregovoy wonders whether modern show and pet breeders who favor "placidity" would breed from what he calls "Houdinis " like my Kazakh female Ataika (left), who routinely escapes from 8- foot fenced enclosures though no bigger than a whippet.

And Dr. John Burchard adds re genetic depletion:"There is much talk of genetic diseases in purebred dogs.It seems the most serious one, ultimately fatal, is called "registration."

UPDATE: Here is what English PETA thinks, via Samizdata.

"Snuppy's birth announcement, published in today's issue of Nature, was greeted with scorn by some animal care activists, who decried the work as inhumane and wasteful, given the global glut of unwanted dogs.

"The cruelty and the body count outweighs any benefit that can be gained from this," said Mary Beth Sweetland, a vice president at People for the Ethical Treatment of Animals in Norfolk".
Posted by Steve Bodio at Thursday, August 04, 2005

I like your blog about Schipperke. I found it when I was doing some research for my own site about Schipperke and must say that you have some great content on here. Schipperkes are great dogs and if you would like more info or products for Schipperkes then you might want to stop by here! or take a look at my blog for future updates. Keep up the great work with your blog.

Excellent blog and thanks for the opportunity to share my thoughts here. I also love dogs and I decided to put together a website dedicated to dog training. However, I am actually trying to offer both some general tips for training your dog and some breed-specific training techniques. I believe each dog breed is slightly different and thus requires an adaptation of the standard dog training methods, to suit the breed’s behavioral patterns and genetic predispositions. This is why I believe there is quite a bit of difference between affenpinscher training and bandog training. Or between dalmatian dog training and Afghan hound training. Each breed has its own distinct personality, and an independent breed like the dal will require stricter training than the disciplined bandog.

There are hundreds of dog breeds I wish to cover and I am only half way through, but I hope to turn my site in the best dog training resource on the Internet.

An excellent day to everyone reading this!