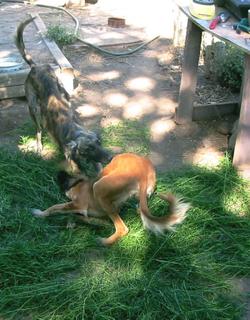 The attraction of, and also the problem with "primitive" breeds of dogs is that they are intelligent. Interestingly, many pop boooks say the opposite; Oriental sighthounds, huskies, laikas are not neccessarily "tractable"-- they figure things out, and you must work with them. This makes many people think they are stupid. As someone who has trained spaniels, lurchers and -- is "trained" applicable?-- a dachshund, as well as dogs of the saluki/ tazi complex, I say "HAH!"

Their traits may be a result of their "growing up " to (nearly) adult or ''wolf'' behavior, rather than being stuck at some level of neoteny, as Raymond Coppinger has suggested. (I will blog more on this subject later if anyone is interested but I suspect a Google search of his name would turn up plenty).They tend to howl and yodel rather than bark, have only one estrus a year, dig dens, and form remarkably complex hierarchies with or without you. As Libby says, they are not beginner's dogs.

One thing they do that can be maddening or endearing is initiate original behavior. For reasons of peace and hierarchy the two female tazis-- Lashyn from Kiev, a South Kazakhstan "Semirichensky"- line tazi, suited for the biggest game and our fiercest dog, and Ataika from Almaty, our Turkmeni-strain sprite, smaller and sweeter but just as tough and arrogant-- spend the day largely indoors. Taik (pronounced "Tyke") can jump over the 8- foot backyard fence and would spend the day killing cats and risking death; Lash is jealous of her status, thinks she is my mistress and that only Libby ranks above, and dominates all the dogs but the Alpha male Plummer, yielding even to him only on food (Taik will submit but only if Lash is gentle about it; otherwise she will fight back hard).

Usually Lash sits to my left on the couch as I type, one paw touching me (Lib calls her "the jealous girlfriend"). This morning dawned cool and gray and windy and she wanted something else. She began to vocalize, making low "wuffs" and grumbles and yodels. She sat on the floor to my right, pawed me, got up, circled, and sat again. Taik murmured agreement from the couch. Every time I moved the mouse, she would catch my right hand with her paw. I said "do you want to go outside?" and walked to the back door. She sat down stubbornly. It was impossible to work.

Finally I went to the front door and both T- girls started racing around the house in ecstasy. "He got it, he finally got it!" I loaded them into the truck and took them for a run. They came back to the truck without hesitation-- often an issue-- and have been angels since.

Now-- I have seen countless dogs who, when you go to the door, know what is going on. I know many more that will even bring you their leashes when they want to go out .

But they had NEVER asked to go out. That is not the way we do it. They don't get a walk when I am at the computer. They have never before initiated a walk. Until this summer, Lash usually spent this time of day outside.

So how the hell did she figure out a way to demand one?

Dunno, Steve. Looks like these dogs have their paws full trying to get you trained!

You are clearly besotted with tazis. That's OK. But everyone thinks their dog is a genius. This blogger thinks her dogs understand human sexuality.