We don't need no steenking penguins!!

..so Reid writes to Matt and me:

"Have either of you seen 'March of the Penguins'? It is a big hit here - projected to make more money than Michael Moore's 'Farenheit 9/11' but as far as I can tell it is some magnificent footage of penguins with the most sentimental, lachrymose, maundering narrative with the worst possible anthropomorphic projections on the birds' behavior and emotions. We were at a party in Manhattan Beach over the weekend with a high proportion of sophisticated Westside LA types who just loved the movie - "The penguins just cry when their eggs break!" etc.

"Connie and I had to tell them a corrective story, and it occurred to me I ought to share it with you. I mean, you guys are falconers and pigeon raisers, etc., and know that birds aren't cute little kids in feather suits.

"Three or four weeks ago Connie and and I were in a theater here in Santa Barbara waiting to see 'War of the Worlds' (which I liked, by the way). The lights were still up and people were coming in to sit down. There were big posters for the local premiere of 'March' that was being used as a special fund-raiser for the local Audubon Society chapter. There were fliers and children's activity books for 'March' stacked in the lobby.

"Two twenty-something age couples sat behind us, obviously on a double date. They had picked up some of the fliers and started talking about 'March'. Turns out, one of the ladies said that she had spent a summer season in Antarctica doing penguin research. I assume she's a UCSB grad student. She was telling her friends that the Audubon Society had asked her to participate in the program they were going to have on stage for the fundraiser before the movie premiere. She said that she had declined because in good conscience she couldn't stand up in front of a crowd of people and say good things about penguins.

"The other girl said, "How can you say that - penguins are so cute!"

"The first girl just went off, (this is almost verbatim) "CUTE! You think penguins are CUTE! They're little BASTARDS! My shins were black and blue for SIX MONTHS from getting slapped by their wings! I have scars on my arms from their damn beaks! I'd pick them up and they'd SHIT all over me! Penguins are EVIL! And you know what else? They have rotten, stinky KRILL BREATH!...."

"And on and on for about five minutes worth of a stand-up comic quality rant. Connie and I and all around us just howled with laughter".

Now: this is even funnier than Reid realizes, because I know all about penguins. Libby's and my best man, John Carlson, a Montana nongame biologist, spent five seasons among the Adelie penguins of Antarctica, and while he may have a slightly higher opinion of them than the young woman overheard by Reid, he confirms everything from krill breath to black-and-blue shins.

He also packed a tux to Antarctica to wear among his penguins (which he did not do at our rather informal wedding).

I'm hoping for some feedback from John, and have asked.... stay tuned! 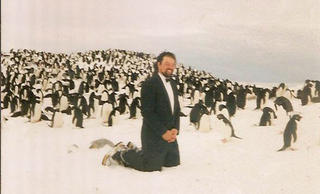 Update: an article from the LA Times suggests the scriptwriters were aware there were some anthropomorphism problems:

""Those guys [ National Geographic penguin experts ] were great," Roberts says. "I mean, they kept me toeing the line. I, of course, wanted more fable than fact, and they would send me these great messages saying 'tsk, tsk' when I strayed too far from the literal truth."

Reid doesn't think they suceeded. "“It really set my teeth on edge to hear my 23 year-old daughter (who saw it) say, "Penguins are people, too!" When we lived in the Sierras in Tehachapi she used to help her ex-boyfriend butcher deer and she knows better!”

What if you were a pigeon at the zoo? An emperor pigeon blogs his life...

Better yet!! Bring one home and really learn to hate them!!

Yes. I do have a demented pigeon fixation...

So what's up with this? Steve posts about penguins and suddenly a google ad for penguin toys and gifts appears on the site? Is big brother penguin looking over our shoulder?

Everything in this post is true. But it neglects the most important quality of the film: it will get you laid.

Check this out, fuel for several fires....

What did you make of "Winged Migration" Steve, or "Wild Parrots of Telegraph Hill?"

Loved Migration (yes it's French-- I LIKE French). 'Wild' parrots was a bit light even though am an urban wildlife fan...