A topic perfectly--perhaps uniquely--suited to the particular mix of interests here: Who were the first falconers?

In a flurry of emails between us, Steve pulling in the expert testimony of his friend John Burchard and adding his own considerable insight; Reid, the ever-sober archeologist, providing lines of evidence from peer-reviewed literature and I wildly speculating as usual; together we had a grand time and came up with no firm answers.

But we established to our own satisfaction that the clock could be set well back from the 2000 BC estimate so often cited. How far back? Reid:

"All your discussion about people being capable of falconry 6000 BP or more leads me to repeat what has turned into a platitude that I repeat when people discuss archaeological cultures and 'primitive' societies. Always remember, the earliest H. sapiens had an IQ just as high as yours or mine. Things like the sophisticated artistic vision of 50K year old cave paintings in Europe shows that. All that sets us apart technologically is the accumulation of experience of the hundreds of generations of people messing around with stuff and occasional learning something new. So the ability and imagination to invent falconry goes WAY back."

Consider the "Ice Man," that Bronze Age blast from the past found mummified on the slopes of the Italian Alps. Reid's listing of the man's sophisticated toolkit, weaponry, well-constructed clothing and shoes led Steve and I to note that these traits could qualify any culture for the necessary know-how and industry of falconry. People with a comparably spare yet serviceable material culture practiced good falconry into modern times, some of them without the benefit of written language. Sir Richard F. Burton, Col. E. Delme-Radcliffe, John Cox, Sirdar Mohamed Osman and others have described serious hawking undertaken by traditional herding and agricultural cultures identical to those of ten thousand years ago. Steve's friends among the eaglers of Mongolia, minus the Internet hook-ups and Mercedes Benzes, are essentially a Bronze Age people doing practical falconry.

And before that, why not? Why not go WAY back? Riffing on Reid's note that so long as humans have been human--just as smart and generally more aware of their natural world--we might as well start sifting the fossil evidence. Matt from our email exchange:

"'Falconry as we know it' doesn't begin to cover what sort of working relationships might be possible between hawks and people. You wouldn't have to find bells and swivels in the boneyard to imagine falconry taking place. Some hawks (the small accipiters come to mind) are very much 'hardwired' and capable as hunters, yet for a considerable period of time (until about October of the their first year) they are extremely tame and manageable. Just about anyone--even children--with a reliable source of suitable food, could raise a small accipiter from a couple weeks of age and be essentially hunting with it in eight weeks. All the while it would be an interesting pet and rewarding on that basis alone, as any Darien rainforest native will tell you.....Something like this would be very easy for me to imagine developing anywhere small hawks, curious people and their prey coexist."

"None known. Aztecs kept 'em, including Harpies, but in zoos. I wonder what they fed them? (Actually I don't!) Some falconry recorded from post-Conquest in South America, and one unique Latin American bird, the Aplomado falcon, enjoyed a vogue in southern Europe until the 1700's"

So Reid hits the Archeo-lit databases, looking to Europe, and turns up some most interesting stuff:

Of falconry, foraging and farming: thoughts on the
significance of raptor remains recovered from proto- and early Neolithic sites
in the Middle East

ABSTRACT: The origin of falconry, both geographically and chronologically, is still hidden in darkness, and it seems doubtful whether we shall ever discover the cradle of this ancient sport.Â? (Epstein) The remarkably consistent presence of raptor remains at many proto- and early Neolithic sites in the Middle East, and the bias in favour of specific elements, have previously been noted by numerous workers. Where the presence of raptor remains at these various sites has been discussed, they have either been used to provide detailed palaeobiogeographical information, or presented as indicating the presence of complex totemic or symbolic activities. However, the raptor (and other vertebrate) data from many of these sites could also support another hypothesis which has, as yet, not been fully explored, i.e that living birds of prey were tamed, managed and perhaps trained in the first faltering steps towards falconry. "

But for my money, Reid's own fieldwork provides some of the best evidence to date for the possibility that early people took up hawks and made allies of them. In this Querencia-exclusive image, just released, we clearly see a representation of some early falconer scaling a perilous cliff and gesturing to others below that the eagle's eyerie is accessible.... 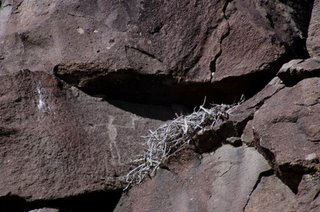 In all seriousness, for more Dobney with full text entry see: http://www.firstscience.com/SITE/articles/dobney.asp