We know from the ethnographic literature that rabbit hunting was a major communal activity practiced by Native American groups in the Great Basin. Julian Steward's classic Basin-Plateau Aboriginal Sociopolitical Groups describes these and the equipment used in some detail.

The major quarry was jackrabbits (Lepus californicus). Communal hunts were held in the Fall and accounts say that groups would congregate over a radius of 60 or 70 miles. For many of them this was the only occasion when the entire macro-band would gather together. The rabbits were driven into nets, as Steward describes: "In the drives they used one or two nets, each about 2 feet high and 100 or more feet long, propped up at intervals with sticks. Eight or ten men beat the brush, driving the rabbits into the nets, while the owners remained behind their nets to dispatch the ensnared animals with clubs." 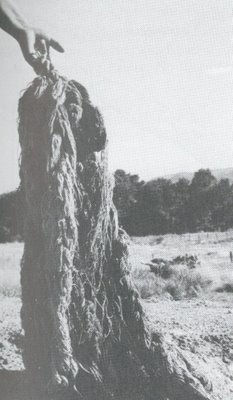 Here is an example of one of these nets. Many similar prehistoric examples have been found in dry caves in the Great Basin. The rabbit drive boss was a position of great prestige as he had to hold the confidence of the members of a number of different bands.

The major reason for these hunts was not so much for the meat as for the hides that were made into robes and blankets. The meat was consumed at once, as dried rabbit meat wouldn't keep for more than a couple of weeks.

Cottontail rabbits (Sylvilagus audubonii) were also taken though not usually in drives. These were taken using snares, bow and arrow, or dragged out of burrows using hooks. 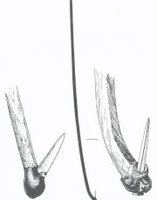 These hooks were also used to drag out chuckwallas and smaller rodents that were also eaten. I saw petroglyph representations of a set of these hooks at Little Petroglyph Canyon last week-end.

These practices have great time depth. Examples of it have been seen in sites that date back as far as the early Holocene. 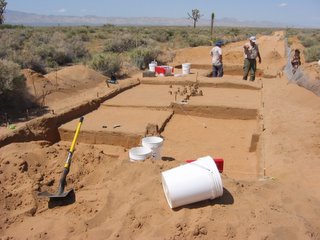 We saw examples of it at this site that we excavated last year in the western Mojave Desert. We are completing our analysis of the material recovered, and the faunal remains from this site are dominated by jackrabbit with some cottontail and other small rodents. 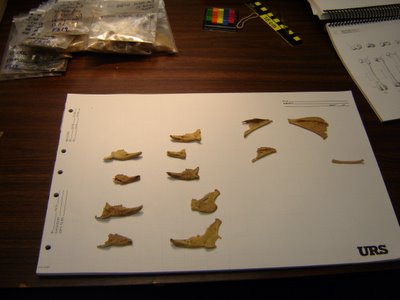 This shot of the lab table shows an assortment of jackrabbit and cottontail mandibles and scapulae. You can see more bags of material awaiting analysis at the top of the picture. There is a lot of it! Their processing and cooking techniques must have been something heavy-handed as most of the bone looks like this. 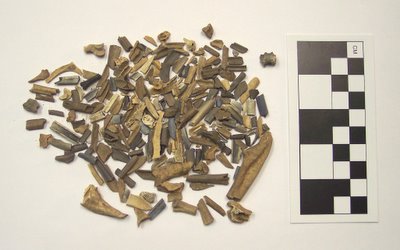 It is likely that after the meat was eaten, the bones were smashed and boiled in water to render out as much fat as possible. The residue skimmed off the top of the water is often called bone grease. Projectile point styles seem to indicate that this is a Late Prehistoric Period occupation (AD 1000 - Historic Contact) and we will know for sure when the radiocarbon dates come back later this month and the obsidian hydration dates next month. Ceramics were known from this period though none were found at the site. The boiling could have been done in pots or in pitch-sealed baskets using stone-boiling techniques: hot rocks placed in the basket to heat the water.

We found a variety of chipped stone tools and waste flakes (debitage) from manufacturing and maintaining the tools. The presence of ground stone tools usually indicates that plant food processing was being done. We found virtually no ground stone here which would seem to indicate that this site was dedicated to hunting.

We excavated two firepits at the site. We sent the ashy fill of the firepits to a laboratory for specialty analysis. The lab used a flotation technique to recover the remains of charred seeds and wood fragments. Their report showed that no seeds were present at all, just pieces of saltbush and creosote bush used to fuel the fire. This reinforces the interpretation that no plant foods were being processed or cooked here. 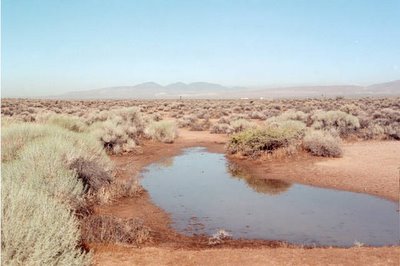 There is no reliable water within miles of the site except when Fall and Winter rains fill pans in the blowouts between dunes as you see in this picture. I've seen this water stand for a week or two.

Based of on all this data I'd say this site fits the profile of a Fall seasonal rabbit drive camp. What do you think?

That last picture looks like excellent jackrabbit habitat to me. Do you have any idea (based maybe on plant remains at the site?) if the climate differed much then from now?

Also: Did these people have dogs? Any evidence dogs were used in the drives?

It is great habitat. We saw lots of them - your falconer friend at UW would have a fine time there. This is also one of those areas I talked about in the pronghorn post, where I can't understand why antelope can't thrive there. Prior to our project, it was wide open, no fences and the only thing going on was sheepherders bringing in their flocks in late Winter/early Spring.

The Late Prehistoric Period (AD 1000 - 1850)that I believe this area dates to overlaps two different climatic episodes. First is the Medieval Climate Anomaly which was a very warm and dry period (AD 800-1300). This was followed by a period called the Little Ice Age where weather was generally cooler than now and weather & moisture variability from year to year was higher (AD 1350 - 1800). We will have to see where the dates come in on this site to know where it fits.

They did have dogs, but the ethnographic accounts don't talk about their use in these drives. I was just looking at Steward to confirm this and he does mention the use of dogs to hunt bighorn sheep as we see them in the petroglyphs at Coso.