While in Ridgecrest, CA over the weekend for an archaeology society meeting, I made a side trip to the Trona Pinnacles National Natural Landmark. Ridgecrest and the Pinnacles are located in the high desert, east of the Sierra Nevada. 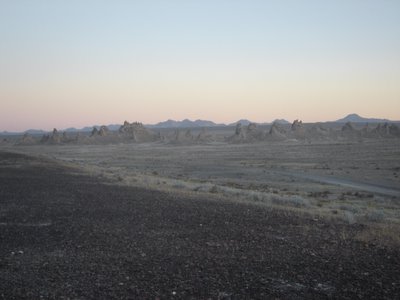 During the Pleistocene and early Holocene, the Pinnacles area was at the bottom of Searles Lake, one of a series of lakes filled with water from retreating Sierra glaciers. The region slopes from north to south so that when Owens Lake (the northernmost) filled it drained to China Lake which in turn drained to Searles. When Searles Lake filled it drained into Death Valley.

The Pinnacles are formed of calcium carbonate or tufa. This formed underwater through the interaction of blue-green algae and local chemical and geothermal conditions. As the regional climate warmed and the glaciers disappeared, the trapped water of Searles Lake became rich in carbonate brine. Calcium-rich underground hot springs welled up through fault line fractures on the lake bottom, forming calcium carbonate deposits. Colonies of blue-green algae then bonded to these deposits and, over several thousand years, formed tufa reefs. When Searles Lake dried up completely, the Trona Pinnacles remained. 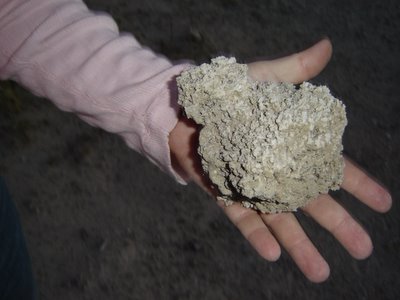 As my colleague, Christine Hacking said when she picked up a chunk, "It looks like coral." See above.

There are about 500 pinnacles and the tallest is about 140 feet tall. A typical spire is shown here. 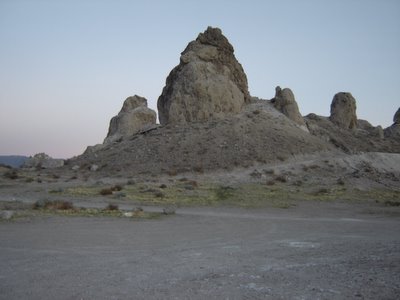 A sign near the base of this one says that it was 640 feet under water when Searles Lake was at its highest. The area looks like a moonscape and has been used as a set for many TV series and movies: Planet of the Apes, Lost in Space, Star Trek, etc. I have seen it in a number of car ads both print and film in recent years - in fact I think it appears in a Ford commerical running now.

The Landmark is administered by the BLM and their website with information on the place and how to get there is here. A family was setting up camp when we were there on Saturday evening. 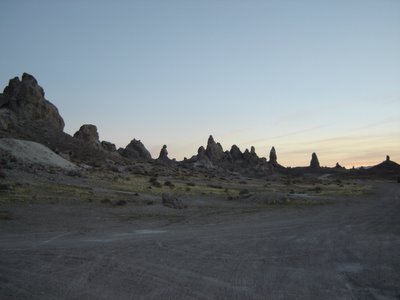 We just went to sight-see, but Searles Lake figured in a couple of presentations at the Society for California Archaeology Data-Sharing meeting we attended. For the late Pleistocene and early Holocene when the lakes were full, relatively few archaeological sites have been found in the area around Searles Lake relative to Owens and China Lakes to the north. The Searles Lake sites tend to be lithic procurement locations where chippable stone was gathered from lag gravel lying on the desert pavement. There are hardly any habitation sites there, whereas Owens and China Lakes have many large village sites and camps.

The lack of evidence of permanent occupation at Searles was attributed to the poor water quality there - it was half-jokingly referred to as the "poison water theory." This seems to make sense when you understand how the Pinnacles were formed. This was reinforced by paleontological data on the Pleistocene fish populations in the three lakes. Owens has many salmonids and other species requiring cool, oxygenated water whereas China and Searles have only chub and pupfish that can withstand warm water with little dissolved oxygen.

Archaeologists being who they are, this was immediately questioned on a number of grounds. Searles has not had the field survey coverage that the other two lakes have had so this contrast may be due to sampling error. Additionally, the depositional situation on the lake margins at Searles is different and this may mean that there are more buried sites that cannot be found in field survey. All very interesting and productive discussion - but it was interesting how the data seemed to hang together for the "poison water theory." The Data-Sharing meetings are fairly informal gatherings where ideas can be kicked around. It will be interesting to see if this one progresses.