Quest for an Aussie

My wife and I have been on a search the last few weeks. Our favorite breed of dog is Australian Shepherd. We have had two as pets and they were both wonderful - very intelligent and very socialized to people.

Osa (1983-1999) was a blue-merle female we bought for $10 at a ranch near Bailey, Colorado. She was the dog of a lifetime. She knew us all by name, knew the vehicles, knew parts of the house. When the kids were toddlers she would herd them. Every evening at bed-time she would go around and "count" us all, to make sure we were in the sheep fold. She had a wonderful long run, but it hit us hard when we lost her. 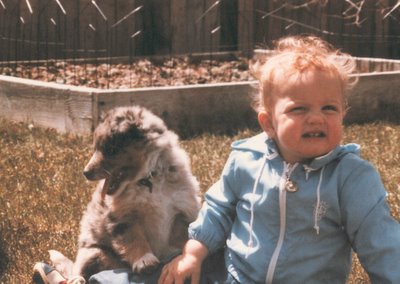 Here's our daughter Lauren and Osa when they were both pups. 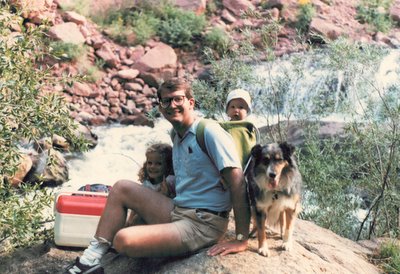 Here's me and the kids with Osa when she was full-grown. We're on an outing to St. Mary's Glacier in Colorado.

One of my favorite Osa stories happened when we were in Tehachapi and she was getting on in years. One evening she came up to me and gave me the "Dad, it's suppertime, feed me!" look. I had already told Travis to feed the dogs, so I said to her (sorta jokingly) "Travis is going to feed you. I think he's in the bathroom." She immediately turned and left the living room, walked across the entry hall, then the length of the family room to the bathroom where she sat down and gave Travis the same look. Like she understood every word.

Kate (1995-2004) was a tri-color female we got for $50 from some folks in Tehachapi. Another smart, sweet dog we lost to a cancerous mass in her abdomen. She was the dog who had a leg broken in the coyote attack I talked about here. 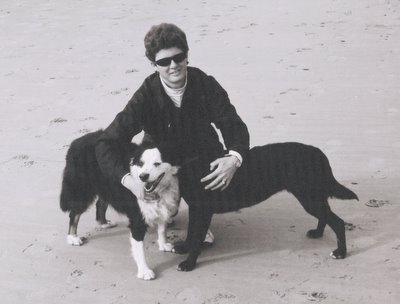 Here's Kate on a beach walk here in Santa Barbara with Connie and Maggie our Lab.

We saw a tri-color pup while walking the beach a few weeks ago and she inspired us to start looking for another aussie.

It's always intrigued me how the breed got its name. The ultimate origin of the breed isn't in Australia at all but in the Pyrenees of France and Spain, where they were bred by Basque shepherds. In the last quarter of the 19th century, improved breeds of sheep were brought to the western US from Australia. These were often accompanied by Basque shepherds who had earlier emigrated in search of work to the sheep-pen the British made of Australia. The Basques brought with them what contemporary observers called their "little blue dogs." As they got off the ship with the Australian sheep the misnomer began.

It's obvious looking at contemporary aussies that they also have significant genetic contributions from Border Collies, Rough Collies, and German Koolies. The bottom line has been that these dogs were a working breed selected for endurance, intelligence, herding skill, and affinity for humans. It makes me sad that the AKC has recognized them. Now you can see people breeding for appearance and not behavior. Aussies are having problems with their eyes and hip dysplasia. The AKC has ruined more breeds.

The internet has made searching for the dog you want a much different process than I have been used to. We could cast our net pretty wide. We made visits to see dogs in the Santa Ynez Valley and last week-end I drove all the way down to Riverside County where I found this female pup 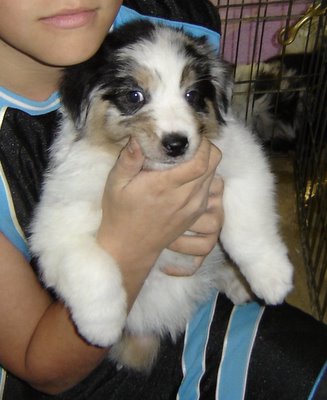 She won't be ready to leave her mother until the end of the month when we will go down and pick her up. I was very impressed at how intelligent and socialized all of the dogs were at this breeder's house in contrast to other places we had been. This was especially true of this puppy's father 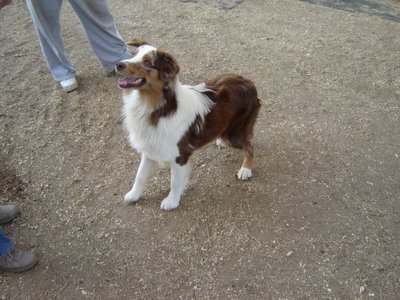 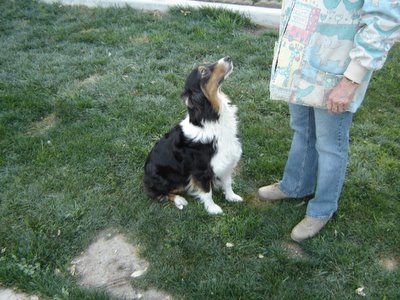 I will keep you posted after our new friend comes home.

You were all the way down in Riverside county and you didn't stop in to see Anakin fly?? Tisk Tisk Reid!

agua dulce based in carpinteria is such a great breeder!! my pup kiwi came from them. his temperament is so endearing, though he has the spunk, but not out of control....my aussies, sport, passed away 1-1/2 yrs ago at age 15..could not live without another aussie companion...
these people at aqua dulce have incredible dogs...i know of several other people that have aussies from them..
they are not on-line with website. but are on the aussie registration website.
hope you do well..in your search....