To some of us, the news that Reid posted about below in "Not Aways at the Top of the Food Chain" was not exactly news. One of the main suspects in the death of the Taung Baby is the Crowned Eagle, an enormous and intimidating forest predator. In Birds of Prey of Southern Africa, published in 1982, Peter Steyn had this to say:

"One grisly item found on a nest in Zimbabwe by the famous wildlife artist D. M. Henry was part of the skull of a young African. That preying on young humans may very occasionally occur is borne out by a carefully authenticated incident in Zambia where an immature Crowned Eagle attacked a 20 kg seven- year old schoolboy as he went to school. It savagely clawed him on head, arms, and chest, but he grabbed it by the neck and was saved by a peasant woman with a hoe, who killed it, whereafter both eagle and boy were taken to a nearby mission hospital. The boy was nowhere near a nest, so the attack can only have been an attempt at predation."

Here is a photo of a Crowned Eagle that was used for monkey control in Zimbabwe. The photographer told me that she sometimes eyed adult humans as though she might be considering taking them on, and that it was unnerving to have her stare at you. 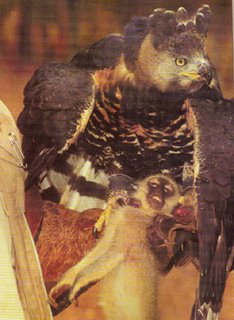 But relatively recently, there were even bigger birds than that, which almost certainly preyed on humans. 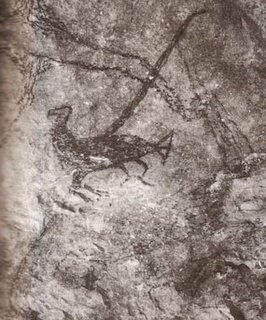 This petroglyph is believed to have been made by early Polynesians-- the ancestors of today's Maori-- in the 13th or 14thcentury AD. It most likely represents the most formidable eagle of all-- the recently extinct Haast's Eagle, Harpagornis moorei. Worthy and Holdaway, the authors of the splendid monograph The Lost World of the Moa, about the extinct fauna of New Zealand, call it "the grandest eagle". Like the Crowned, the Harpagornis was a forest- adapted eagle with relatively short wings. But it was HUGE-- those "short" wings might have spanned nine feet. Flying birds are very light because of their pneumatized, hollow bones. The Harpagornis probably weighed up to 18 kg. Does that sound small? Well, the extinct Teratorns of the La Brea tar pits weighed about 14. Harpy Eagles, the largest alive today, weigh 9. And Golden Eagles, which the Kazakhs still use to hunt wolves and which have been known to kill humans, weigh less than that.

The Haast's Eagle apparently hunted moas, the great extinct flightless birds of New Zealand. Many moa bones of several genera have been excavated by the authors, showing deep punctures in the pelvis that correlate perfectly with the talons of the eagle! The Maori have legends of being attacked by giant flying birds as well as many more rock paintings of them. The authors say: "Although it never can be known for certain, it is possible that eagles killed people, just as people killed eagles.The birds were certainly powerful enough to do so, and their claws were much larger than those of the Mongolian Golden Eagles that can-- and do-- kill the falconers who fly young birds against wolves. Accustomed as they were to preying on large bipeds, the eagles could easily have mistaken the newcomers for a bizarre new form of the old quarry, a mistake that would have been all the easier if the human was wearing a sealskin cloak or one made of moa feathers".

The great bird survived the coming of the Maori, in the 13th century, and one plausible report is dated 1860! But the Haast's Eagle, like America's Pleistocene predators, at last had to follow the moas, its prey base, into extinction.

There is something deeply frightening about being attacked forom above. Maybe it's a primitive reaction to our-- meaning mammals'-- oldest predators. For, as we all should know by now, birds are dinosaurs are birds.

Hi, I was surfing the internet and came across your blog. I'm quite impressed , with how it makes such good reading.

This is one to watch.

Philippine Eagles had also some similar stories going around.

"The philippine monkey eating eagle, not only eats monkeys but also human babies. I read of one incident in the 1960's or 1970's". It was a true incident which was reported in the newpaper where a Subanon infant was snatched by the eagle and brought up the sky!!!

The Great Philippine Eagle is the largest living eagle species in the world in terms of physical dimensions second to Harpy eagle but only in weight 7-8 kl; Harpy's averaging 7.5 kl up to 9 kl. Probably the tallest living eagle stands a meter tall 95-112 cm in lenght, up to 240 cm in wingspan.

Philippine eagles inhabit tropical rain forests and are well-adapted to life in dense foliage. Despite their great size, they have short, broad wings and a squared-off long tail that allows them to rise almost vertically between trees and maneuver with speed and agility through branches and vines. They are adept at snatching monkeys or other mammals or birds from trees. The Philippine eagle also attacks domestic animals such as dogs, pigs, and young goats.

I would love to know more about this!

I've seen this eagle in youtube and It's huge, really amazing how it navigates the dense forest despite of its massive wings and size.

I was really searching for hours to find a good photo of this maori charcoal drawing. I have seen it already many years ago in a documentation, and it showed also the dead albatross and the human hunter. Where did you found it?

These are the good techniques which are very much helpful than other, to get rid of birds, thanks.
birds control