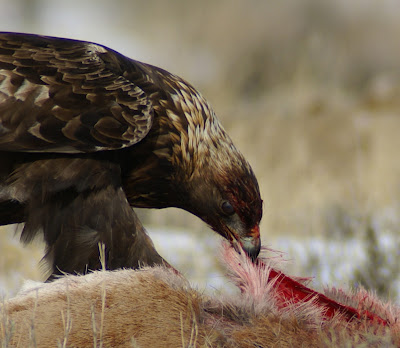 Adolph Murie described golden eagles harassing bears in Alaska as they swooped and dive-bombed the bruins. This type of action has been viewed by naturalists on numerous occasions, with the consensus being that the eagles were either playing or curious, or simply hanging out waiting for the bears to take down prey that could be scavenged.

But a few recent observations have provided an entirely new view of the relationship between golden eagles and bears. In April 2004, a Norwegian research team was watching a female brown bear with three cubs as they moved and foraged on an open slope. One of the cubs was smaller and slower than the other two, and repeatedly fell behind enough that mama had to turn back to retrieve the straggler.

Once again the smallest bear cub fell behind, and as the researchers watched, a golden eagle glided out of the clouds and grabbed the cub with both feet, lifting it into the air, as it struggled and cried. The mother bear’s rushing charge was too late to save the cub. The eagle flew over the research team as they watched through binoculars with the captured cub “struggling, its feet and head waving from side to side as it vocalized loudly. The eagle, carrying the cub, gained altitude and was lost from view when it flew into the clouds …” The team could hear the cub crying for several more minutes, suggesting the eagle landed with the cub. The team could not find the cub carcass.

This incident raises the question of how often eagles predate bears. The researchers posed the question to the international bear community and learned of just a few other occasions. Several observed incidents in Slovakia in 2005 involved an eagle harassing bears (either small bears or sows with cubs) enough the bruins ran for the cover of trees, dodging and evading as they retreated. In addition, a brown bear cub recovered from the Italian Alps in 2003 was determined to have been killed by an eagle.

In the 1950s, a Canadian naturalist described an incident involving a large eagle carrying a black bear cub overhead, before dropping it onto a rocky lakeshore, where it landed with a thump. The eagle watched it from above before retrieving the carcass and carrying it to a nest. In 2002, fragments of a yearling brown bear skull were found in an eagle nest in Poland.

The authors of a recent article on eagle predation on bears conclude: “Predation on bear cubs by eagles might be more common than it appears from these few observations because the opportunities for direct observations by humans are very limited.” Even if it only happens every now and then, it’s fascinating subject matter.

The article is in the new issue of the journal Ursus, but can be read in its entirety at BioOne.

That's a new one for me.

Considering they kill antelope and grown deer, the main problem would be evading mama!

Dang, this info is just a little too late. Imagine what great symbolic propaganda this would have been were it known during the cold war?!!...L.B.