Libby and I participate in a Forest Service program as "site guardians" for a known archaeological site, a rather large pueblo of perhaps 200-some dwellings. From any distance, despite its size, it is almost invisible-- which in these days of thoughtless looting and vandalism, is probably A Good Thing.

Peculiar has some things to say (as well as more photos):

"This ruin doesn’t look like much. It’s never been thoroughly excavated, only a few test spots have been dug... But this was a big one, two stories and something like 250 rooms, with numerous kivas. It’s further south than you might expect, a little outside the area most people think of when contemplating Pueblo archeology. It’s also thought that it was inhabited until a while after the Spanish entrada.

"Over-publicizing locations is often a potential moral dilemma in landscape photography, and much more so when archeology is involved. I know of this site only due to local contacts, including the designated caretakers. But though it’s almost completely unknown, it’s also distressingly accessible. I’ve therefore chosen to pass on posting the more dramatic angles on the site, because they contain features that would allow someone sufficiently familiar with New Mexico geography (like a pot hunter) to get a pretty good idea of the location."

Same here. But there is still plenty to see.

Libby and Taik search a kangaroo rat midden. They can be destructive but make great places to see pot chips, arrowheads, and bones, as they turn over amazing amounts of soil. 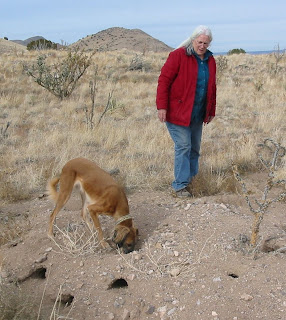 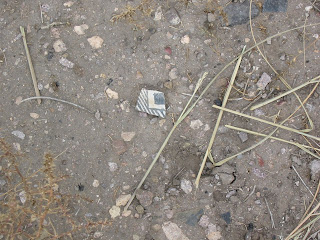 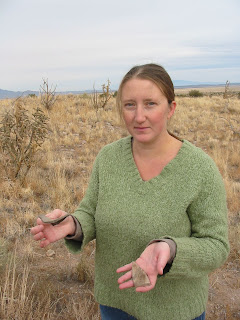 Notice how the ranger has strategically placed dead cholla so nobody will drive over the ruins.It will surprise no one that we have to replace them periodically... 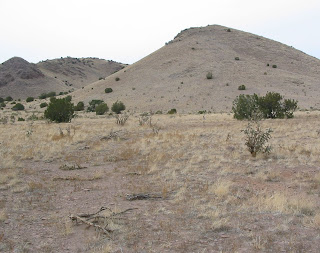 We also report graffiti and vandalism-- though a modern misspelled religious petroglyph is going to take some work to remove. 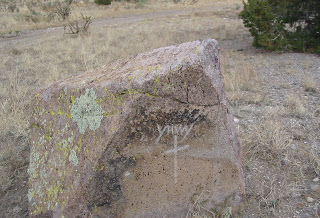 Email ThisBlogThis!Share to TwitterShare to FacebookShare to Pinterest
Labels: Archaeology

I wonder what the proposed Wrath is for misspelling the name of the Old Testament God. Do you think this is some sort of directed graffiti (those heathens!) or more of a coincidence.

Does that stone or others near it also contain more ancient inscriptions or it's proximal to the site.

There are petroglyphs within ten miles but none at the site.

This is VERY new-- less than two months-- we go there often. Not sure of the motive-- beer cans are far more common...

From the look of that hill in the background, this must be the site you took me and Connie out to when we visited a few years ago. Very nice site. You guys are in the area that was occupied by the Piro Pueblos.

The black-on-white sherd in your picture looks to be a Pueblo III style by the look of the mineral paint, firm lines, and zoned hatching. I'm not familiar with the type names down there, though. That would put it around AD 1150 - 1350

The sherds Nikki is holding look like plain-wares, but appear to be brown, rather than the gray or white you'd expect on a Puebloan site. I don't know if it's the picture or my eyes or maybe the sherds are just dirty. Of course, you guys are so far south you are near the Mogollon culture area where brown-wares are the norm. Brown-ware ceramics traded north wouldn't be that unusual.

It's great you guys are doing this. If you can get the site number from your friend at the USFS, I can maybe find out more about the site if you want

Will do-- and will send more sherd pix too (yes, same site).

I don't know what part of New Mexico you're in, nor how specific my ancestry is, but I've just confirmed that my 3-4% Asian ancestry is Native American, likely from Las Vegas, NM area more recently. I guess that would be Pueblo Indian as a probable starting point for my G-G-G Grandparent.

Apparently my ancestors lived and walked those grounds.

Also, did you check out the % Neanderthal feature yet? I'm slightly above average.

I am further south but still within historical Puebloan boundaries (Socorro county).

I'll try to get to Neandertals today-- so much content!