Annie Hocker sent me this fascinating piece of Hemingway criticism from the New Yorker, in which he calls The Sun Also Rises , at least the new edition, a piece of proto- metafiction. I disagree on definition, but he makes a decent case; it is still a must-read piece for Hemingway fans and scholars, and far more right than wrong.

The author, Ian Crouch, says:
"...Hemingway was attempting to write a novel very different from what would become “The Sun Also Rises,” which made his name as one of “those ones with their clear restrained writing.” He imagined a book in which the “whole business” of life gets expressed, in all of its messy detours and associations... This minor manifesto, embedded in a draft of his first novel, conceives of a book with greater intellectual and artistic ambitions than Hemingway ever produced—one akin to the more abstract fictions of the modernists... The Sun Also Rises” is far from being a lesser thing, for all of its restrained clarity. It is partly a book of “literary signs,” perhaps against Hemingway’s own intentions. But it is also a book—Gertrude Stein be damned—of remarks, both in the elliptical declarations that the characters make to one another, and in the weighted silences that linger between them. “I mistrust all frank and simple people, especially when their stories hold together.” That line, which belongs to the narrator, and to the author, was there from the beginning. It is an echo of Hemingway’s more eager and brash equivocations in the drafts, a claim that there was an unseen depth to his plainspoken prose. It is an author’s note, a statement of purpose—subtly and skillfully absorbed into the art of storytelling."

I think this is entirely right, but I still think that he is wrong saying that TSAR is an intentional piece of metafiction. By this standard, any novel that has been self- edited and exists in drafts or a variorum form could be called a metafiction.

(Also, that it would have been "richer" is an odd judgement; Hemingway, with  some advice and a lot of self- editing, pared it down to a piece of art. The "other" book might have been good, but it would not have been Hemingway's Sun.)

A better candidate for metafiction would be The Green Hills of Africa, usually considered a journalistic book. If so, it is journalism the way Norman Mailer's The Armies of the Night is. In my essay in Sportsman's Library, I leaned to the idea that it IS a self- conscious metafiction (I don't use the word), and is announced and intended to be: "...Green Hills seems utterly modern, or even postmodern, but this is after the journalistic revolutions of the1960's and 70's that brought us the New Journalism and Truman Capote's "non- fiction novel" In Cold Blood. By the standards of the 1930's, it is a damned strange book.  Hemingway explicitly warns the reader in his three- sentence foreword: "The writer has attempted to write an absolutely true book to see whether the shape of a country and the patterns of a month's action can, if truly presented, compete with the work of an imagination."

If not so consciously  claimed by the writer, that superficially odder (and undervalued) volume, his posthumously published The Garden of Eden, has many strange and po- mo aspects too: its androgynous erotic scenes, where the woman cuts her and her lover's hair identically; the African hunting tale within the tale,  itself a lyrical passage  about a childhood hunt in an Eden akin to that in W H Hudson's Far Away and Long Ago, (a book Hemingway had read and recommended), but presented in the novel as the writer- protagonist's childhood AND work. How many layers is that? Is it because urbanites and academics no longer hunt, and so cannot see hunting as an idyll, that they dismiss this long fragment as a "boy's" (as in "Boy's Own") book?

No particular conclusions here, but that Hemingway always intended; knew, and subtly suggested, that a lot was going on under his simple sentences, and that this critique is more right than wrong.  As I said in the book of books: "Hemingway's ghost haunts us all". 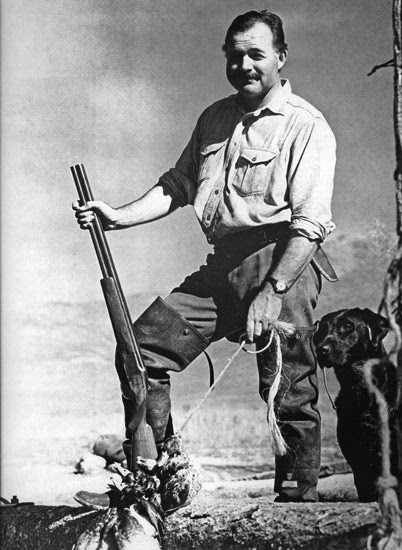 UPDATE:
Matt Mulllenix writes:
"In the same way Lyle Lovett calls his ballad 'Nobody Knows Me...' a "cheatin' song about Mexican food," I've always thought of GHOA as a hunting book about the writers life.

"But I've never found much satisfaction puzzling Hemingway's motives. I've wanted to.  I think in some ways HE wanted us to. But in the end, I think he was most easily understood as an intelligent, ambitious, sometimes insecure writer who was also a hunter. And in that frame, he was like many writing hunters I know: wanting first to get the words right because the pursuit (and the animals) deserved that.

"But also, as a writer and an explorer (as the best of them are), I see him as wanting to claim new ground wherever he went.  So well read as he was, this must have been a constant challenge.  I can see him, without much difficulty, "inventing" a postmodern perspective or at least anticipating it by trying to go where his heroes and contemporaries had yet to pass." 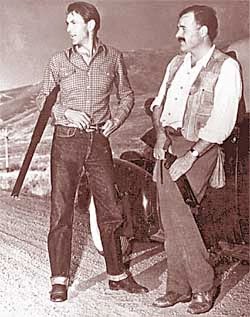 Ive always thought GHOA one of Hemingways most interesting works, one that can be read many times always with something new found. And I maybe damned for saying this but ACROSS THE RIVER AND INTO THE TREES is full of stray thoughts, references, recollections and images that together accumulate into something with real force

Maybe he was trying so sound profound when he labeled TSAR metafiction. Your statement is profound: "Hemingway's ghost haunts us all." There's hidden meaning meaning there too. Perhaps H's genius,or part of it, was to invoke hidden meaning and ghosts but not define them because he knew that when the reader searched for them, he found the hardest hitting ghosts of all, those that haunt his own soul.

Personally, I prefer GHOA of the two: TSAR seems to have something missing at its core. It's not his fault it's a young man's book, but he doesn't have a clue about the potential of love that's not sexual.

I am always suspicious of the idea that there is something more and richer in an original version. In song as well as in prose.

My favorite example of a songwriter self-editing to great effect is Springsteen's "Stolen Car." The "Tracks" set contains a longer version with a great deal more narrative. The version that made "The River" album is pared down to four short verses with the "story" almost gone, and it is MUCH more powerful — a perfect example of 10 percent of the iceberg showing, but carrying the weight of all that is below the surface.

Hemingway is hard to get a handle on, but I bet you're right Matt about him wanting to make us wonder about his motives. I can't fathom why he wrote some things unless it was to keep us guessing.