Woodcock Here and There..

Well, not really here. The only Woodcock I ever saw in Magdalena was a storm-blown starving vagrant that some neighbors brought me and that died of starvation by the next day--being 500 miles off course does not bode well for birds.  No, I mean in the US, and in the traditional haunts of 'Cock in Europe, where the birds are more than twice as big as our US species. As they are the most delicious bird that exists, if cooked right, this is a Good Thing.

I have written about the dense cover New England Woodcock inhabit, to the mild amazement of my Western and European readers. Hers is Gil Stacy's pic of GEORGIA Woodcock habitat. There really is a dog in there, though you have to look hard. (Double or right click to enlarge). Suffice to say that I would not walk or put a dog in that cover without frost first--it is PERFECT for eastern diamondback rattlesnakes, the largest venomous snakes in the US. 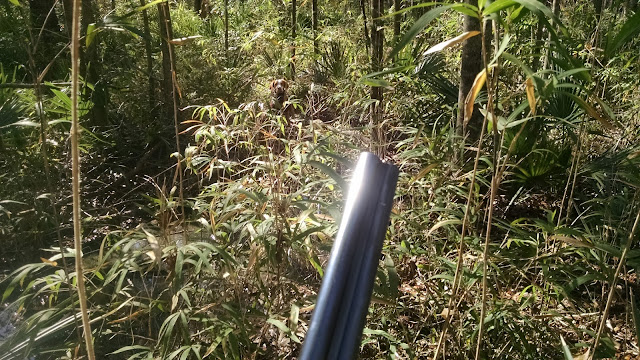 But they do well. 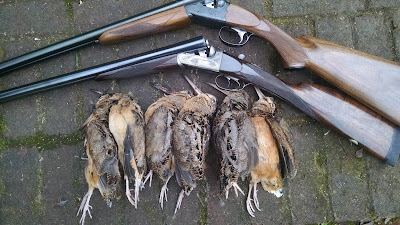 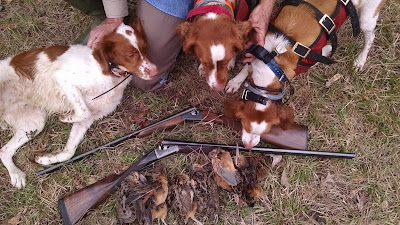 Of course, like mine, his dogs are very disciplined. He wrote: "One thing I find important in training dogs for woodcock is no coddling or spoiling.  Human contact should be at a minimum except for feeding and canine work in the field.  It also pays to harden dogs by leaving in kennels with concrete floors, especially in the cold.  A spoiled dog is a ruined dog.  Here are Abby and Willa in their kennel contemplating the hunt." 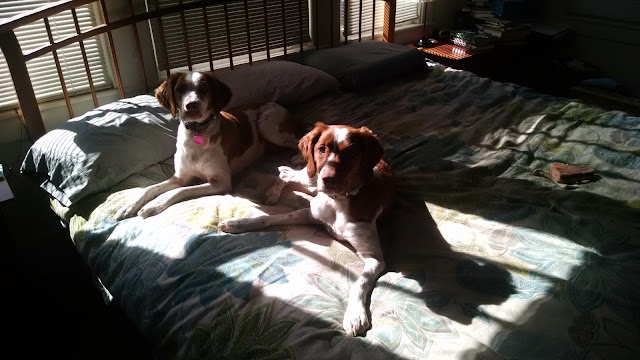 Gil's partner in the hunt is the sporting wood carver-sculptor Floyd Robbins. He doesn't just make images of LIVE birds-- he carves dead ones good enough to fool me. 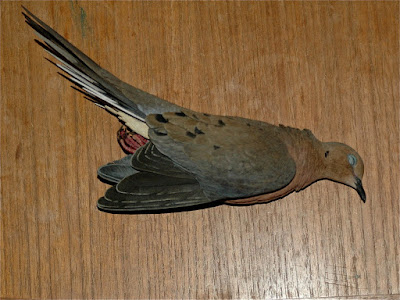 My e- friend Djamel Talha runs the fine gun blog La Chasse et les Fusils Fin Here are a few of his pics from a Woodcock hunt in Brittany, with a fox and a Red- legged partridge.. 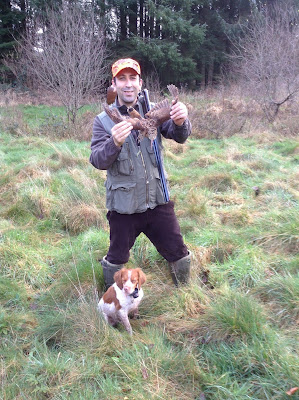 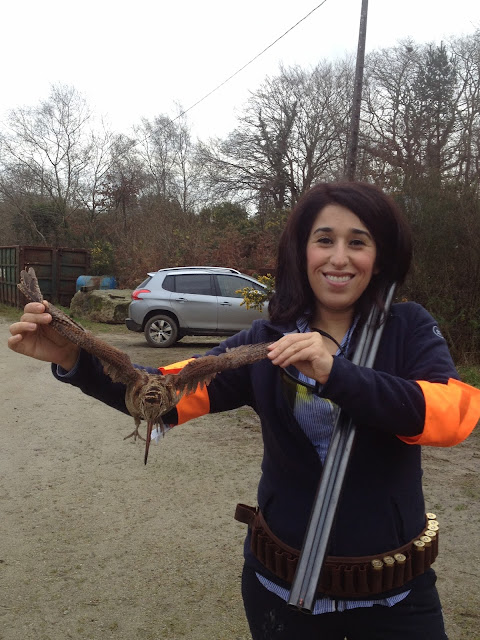 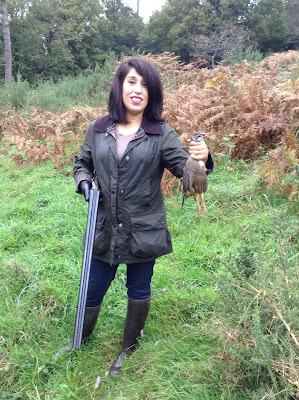 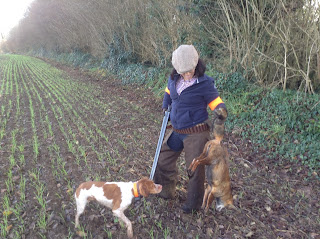 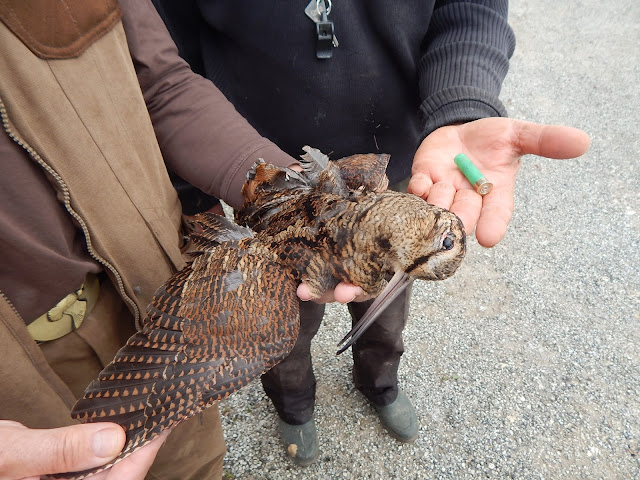 He wrote: "I was invited by my two friends Patrice Eyrolles, a real purist passionate woodcock and Patrick Morin, a Brittany Spaniel world renowned trainer, in the homeland of the latter, namely, Brittany, a region woodcock ultimate. My wife and I spent a memorable week!

"Woodcock on the photo, it is me that I shot. With the help of the formidable Irina female dog of  my friend Patrice; she just two years and at the edge of a wood, it successively traverses three hurdles surrounding an adjacent field, taking care to have a good side so that the wind brings him fumes. Observation justified by the sudden immobility of Irina on the hedge on my left. Arrived at ten meters two woodcocks off from the other side of the hedge under the nose of the dog. However I could follow their eye off well and I deduced that they would seek refuge down below, on the edge of a wood. As soon as we come to this place a few minutes later, I see Irina petrify, then I follow the flight of Beautiful, to finish the action with a superb shot from about 60 meters, leaving the bird fall by the Holy Spirit to provide the little spaniel pleased to report his trophy."

Kirk Hogan, who shoots in Normandy, adds this link.

And for old times sake, me with Woodcock and Parker, ca 1975. 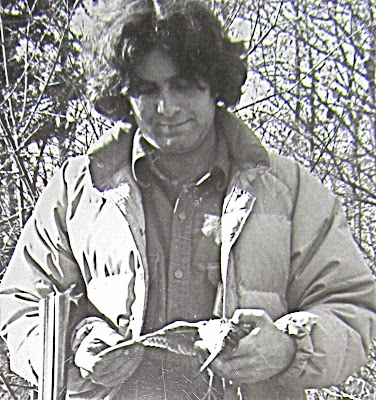 Great report. The pictures remind me of happy days spent with a rather wild Brittany , who ranged wide , but always froze on birds!
I,too, shoot the odd woodcock during both driven and walked up shooting.
I always marvel at their beauty, and would not wish to shoot many......They are indeed prized for eating here in UK as well.
However this year , because of the extremely mild weather n Northern Europe, we have not had the usual migratory "fall " of cock, so far.
Traditionally , they fly over the North Sea ,under the full moon, and are found in thickets in my native East Anglia, where they rest and recover . They then move on to their usual wintering grounds in SW UK, where the climate is warmer , due to the effects of the Gulf Stream ( "Normally"!)

Steve, is the green shotshell in the photo 32 gauge or .410 short? Gil

Should be fixed now- let me know!

It's up and running. Thanks. I see where it has a link for bespoke woodcock dog bells from the Pyrennes. Now, that's class money can buy. Gil

For about 4 years, at the Memphis gun club's sporting clay course, a European Woodcock took up residence. The club is on a very swampy area on the Loosahatchie River. The bird was always at the end of the course near the rabbit station. Gunfire did not overly bother it as it would flush and return to cover. We often discussed the long journey it endured to get to Memphis. Several of us had shot in England and recognized the bird because of its large size. Then suddenly it was gone. Predators, disease, migration, whatever. We missed our special woodcock.

It seemed like such a good time! I love hunting for woodcocks because you have to have a dog with you.