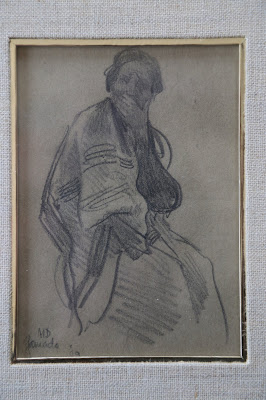 As Steve mentioned in an earlier post, Connie and I drove to Santa Fe on April 9 to attend (RockStar) Helen Macdonald's book signing. We arrived mid-afternoon, checked into our hotel and went to the Plaza to kill some time before we went to pick up Steve and Libby and go see Helen.

We went into a gallery and I was completely floored to see three pieces by Maynard Dixon on the wall: a graphite sketch of a Navajo woman, a small pastel landscape and a pen and ink sketch of an Indian woman in a buckskin dress. Those of you who know me and who have read this blog know Dixon is one of my favorites and Steve and I agree that he is our favorite Western artist. I had never seen anything by Dixon for sale before and I suppose I had been so conditioned by seeing his paintings selling at the big auctions for six and seven figures I never thought it possible to own something by him.

They were all in our price range, but we liked the Navajo woman best and bought the sketch. All three pieces had been matted and framed the same by a company in Santa Monica and likely came from the liquation of a collection in the Los Angeles area. Unfortunately the gallery couldn't tell us much about them. We will definitely get this re-matted and framed as the frame is worn, the matt is pretty ugly and done poorly - it cuts off part of the signature and almost cuts the woman's head.

It's 4-1/2 by 6 inches and is signed "M.D. Ganado '09."  It was likely done on one of the occasions when Dixon visited his good friend Lorenzo Hubbell at his trading post at Ganado, Arizona. The woman is wearing the traditional dress of long skirt and velvet blouse and has a striped blanket draped over her shoulders.