My step- grandson Eli turned 7 the other day, and I am gratified that he is becoming a proper "Rudyardite" (see Kipling;s own "The Jane[Austen]ites" for clarification).

The Jungle Books are full of violence, predation, and even war ("Red Dog" ) but they give a child a chance to see that while evil and violence will always exist, goodness and justice may sometimes prevail, perhaps more than in the real world, yet never without painful loss. They are great books, ones that still teach me many things since I first encountered them at the age of four.

In his illustration, Eli has obviously relished Kipling's rough humor. The evil monkey band that kidnapped Mowgli have been tracked to their headquarters in the Cold Lairs, an ancient human ruin, at the request of Mowgli's teacher Baloo, a bear, and by his guardian Bagheera, a panther. Kaa has the snake's legendary ability to mesmerize his prey and he ordered the monkeys to march down his throat. Eli has taken this quite literally, as you can see. Outside of my clipped version he had drawn Baloo and Bagheera also stepping forward, momentarily beguiled by their friend the snake. Mowgli has put his hands on their shoulders to break the spell.

I am particularly interested in the look of the snake. Eli has been surrounded by pythons since before he was born; his parents keep snakes. But his Kaa has the look of one of the big native pit vipers of his Great Basin homeland. I suspect they have more authority.

I hope Eli continues to be a good Rudyardite, and that some day he may sit on the gun Zim Zimma, the cannon under the treasure house at the end of the Great Trunk Road in Pakistan, as Kipling's greatest character, Kim, and his real grandmother did before him. 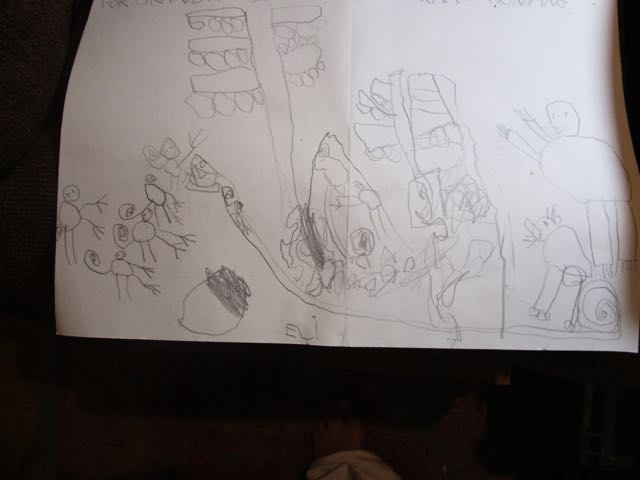