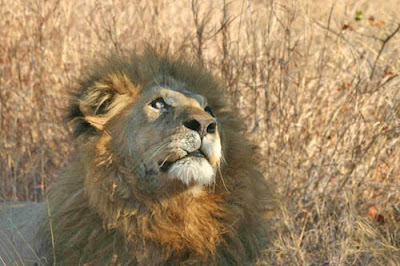 I am trying to bring the ongoing critical wildlife situation in Burkina Faso to the attention of people (literally anyone) outside that country. As you may know, Burkina Faso, Benin, and Niger provide habitat for the final viable herds of savanna big game in West Central Africa, including the last few hundred endangered West Central African lions. Now terrorism threatens the system that has supported the conservation of these animals and habitat. If allowed to go on unchecked, the herds, if not all the animals, in Burkina Faso, then Benin and Niger, will be gone in a disastrously short time. I would invite you to click on my timeline at Facebook (Thomas McIntyre) and read my several postings over the last few days on this unfolding tragedy. If there is a way of contacting you directly, I hope that I may. I wish you the best, and I am, very truly your, Tom McIntyre.

Background: For all of my nearly sixty-seven years, I have been fascinated by Africa, its environment, people, and wildlife. Over forty years ago I was able to make my first safari to Kenya, and have returned to the continent more than a dozen times. This has led to a career as a writer on outdoor topics and numerous books, including my latest, Augusts in Africa.

Last January, I was able to travel to and hunt in the nation of Burkina Faso; and it was extraordinary to see so much large wild fauna in West Central Africa–everything from elephants and lions through buffalo, Western roam, kob, hippo, crocodile, francolin, guinea fowl, all wild and free ranging. It was a small piece of Africa, but the concept of giving the wildlife value through safari camps to give the local people a stake in wildlife and wild-land conservation was clearly working. Then last week, in a series of e-mails from a contact of mine [Arjun Reddy], there was this (I will leave my friend’s words in their raw, unfiltered state so you can better judge the level of his outrage, frustration, and profound sorrow). Regrettably, in the current climate, I don’t think we can count on our government to take any action, at least not without its being prompted So it may be, indeed, up to us:

I am very sorry to inform you that the jihadists have burned down our camp in Burkina Faso last week as well as several other hunting camps. We had already cancelled the coming season! The eastern part of the country was always quiet but has suddenly become a hot bed of terrorist cells of al Qaeda SOBs.

Fortunately no one was in camp! The caretaker had gone for lunch…

They have burnt many camps now. Government is useless…if they [al Qaeda] set up camp in that area and make it a no-go area it will be the end of the wildlife. The elephants are already killed off, all the big ones, now they will finish the rest. Its very sad Tom. I want to set up a FB page to bring the world’s attention to this issue!!!

It’s a very sad situation as their plan is to create a base in that forest area and get rid of all the wildlife and government authorities. No doubt the game will all be gone if nothing is done about it soon...
Is there anything we can do to bring it to the attention of SCI [Safari Club International] and DSC [Dallas Safari Club–and I would add the conservation community in general: This is clearly a matter of wildlife, human rights, and terrorism] so they can lobby our government to put some pressure on the government of Burkina or raise attention to this situation!? Everything can be rebuilt but the game will be gone forever if this goes on for a few years! As it is they have wiped out the elephant bulls and now working on the cows and anything with even the smallest ivory!

Rather unwelcome words to share this time of year, even more so for me to hear–I knew this place, these people, these animals.

This letter represents a portion of what I am trying to do to raise awareness of this potentially tragic, for all of the three mentioned above, situation.

If there is anything you can do to bring attention to what could be the end of some of the finest savanna wildlife left in West Central Africa, I can only hope, with respect, that you will.
Thanking you for taking the time to read this letter, I am