A common form of prehistoric rock-art here in California is the cupule. These are shallow round depressions ground into a rock face, usually in no particular pattern. Here is a picture of my colleague Bryon Bass next to a rock covered with cupules. 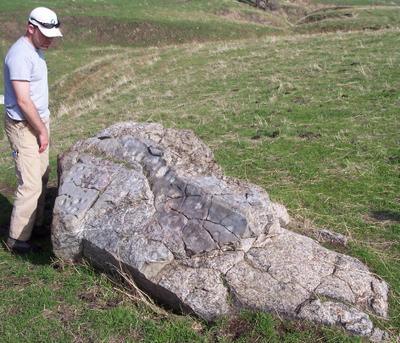 This location is in Kern County in the foothills of the Tehachapi Mountains – the extreme southern boundary of the Central Valley. Historically this was a boundary area between tribes, shared by the Southern Valley Yokuts, the Castac Chumash, and the Kitanemuk. Here is another example from the same general area. 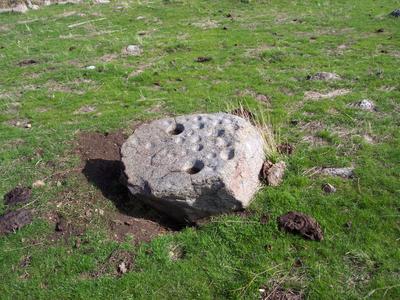 Cupules should not be confused with another extremely common archaeological feature found here, the bedrock mortar. A picture of some typical BRMs is here. 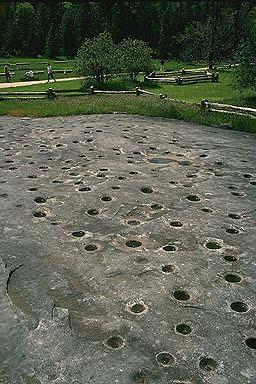 Mortars are functional – they served as facilities to crush acorns and other seeds for food processing. As such they are usually found on horizontal surfaces and are quite large and deep. Cupules have been interpreted as non-functional – they are shallow and usually found on vertical or slanted surfaces and there is no evidence that anything was ground in them. You can see this in the pictures above.

They are somewhat enigmatic. It’s hard to think of them as “art” as they don’t seem to represent anything and usually are placed randomly. Ethnographic accounts of the Yokuts describe these as markers commemorating the completion of a “coming of age” ceremony for young women. Each girl ground a cupule at the completion of the rite and families had their own special rock faces where this was done. Data from other tribes here links cupules to other fertility rites.

Kevin Callahan, an archaeologist from Minnesota, presented a paper at the Society for American Archaeology meetings a few years ago that tied California cupules to a world-wide phenomenon that apparently has great time depth. That is geophagy – the eating of earth.

In this view some cupules were “functional” in the sense that they were made to grind and obtain rock powder. This powder was eaten as part of ceremonies to ensure fertility. Callahan cites ethnographic data to back this up.

Geophagy, however, is a much wider phenomenon than the example above, linked to dietary deficiencies and medicinal uses. Every time you take Kaopectate, you are swallowing an elixir of water and kaolinite clay. While searching in vain for a link to Callahan’s paper, I did find this interesting article by Suzanne Ubick in California Wild that discusses his work and has lots of other fun facts about eating dirt.