A Ghost of Evolution

A fascinating book that Steve introduced me to is Connie Barlow’s Ghosts of Evolution. The essential biological truth that forms the book's basis is that many plant species evolve in concert with “partner” animal species that serve as agents to disperse the plants’ seeds. The evolutionary strategy is that the plants evolve fruits that appeal to specific animals, who eat the fruit and drop the seeds in their feces in areas away from the parent plant.

Barlow uses the pathfinding work of Dan Janzen and Paul Martin (cited multiple times on this blog!) who have pointed out that there are a number of plants here in the Americas (and elsewhere) that no longer have animals that eat their fruit. The breakthrough concept here by Janzen and Martin was that the animal “partners” for these plants are extinct and that most of them were Pleistocene megafauna. Their term for these plants is "ecological anachronisms". They are the “ghosts of evolution” of Barlow’s title.

While back in Arkansas recently, I saw one of these “ghosts”, the osage orange (Maclura pomifera) shown in the picture below. 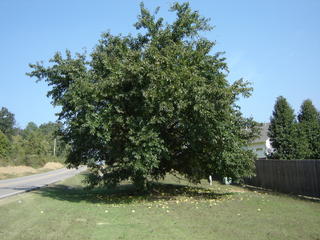 The tree’s range at European contact was the Red River Region where Arkansas, Oklahoma, and Texas come together. The tree was prized for its wood by Native Americans, who used it to make bows. This is reflected in the name that French explorers gave the tree, bois d’arc, that survives in the name of a river in the area.

You can see the tree’s fruit at the base of the tree in the picture above and in the close-up below. 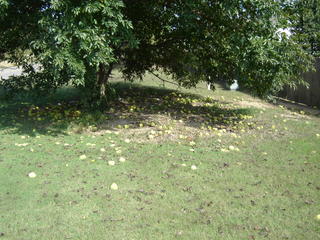 It is green, rock-hard, and orange-sized. The inside oozes a nasty sticky latex. No native animals eat them. They don’t taste very good to humans – Barlow tells of her experiments in that arena, “…more like air freshener than food.” As you can see the fruit falls to the base of the tree, sits there, and rots. No dispersal agent – that fruit isn’t going anywhere.

Actually, its dispersal agent in the last 200 years has been humans. Farmers in the eastern US planted the tree in thickets to make hedgerows before barbed-wire was invented and thereby expanded its range. Also, come to think of it, when I was a little boy growing up in that area my friends and I would run around the neighborhood throwing the “oranges” at each other. So I guess little boys are an important dispersal agent these days.

Barlow reaches the conclusion that the fruit evolved to be eaten whole by mammoths or mastodons and that these are the missing “partners”. Some experiments she made feeding the fruit to zoo elephants were inconclusive. She does give some anecdotal evidence that horses eat them. Actually, the common name for them I remember in Arkansas was “horse apples”.

Of course, if this is true you have to remember that the horse is also an extinct Pleistocene megafauna, missing from North America from 14,000 years ago until the arrival of the Spanish.

You need to go to Creationevidence.org for the truth-to be more explicit-Evolution theory is just that proposed theory, not fact. May God help you to open your eyes to the truth.