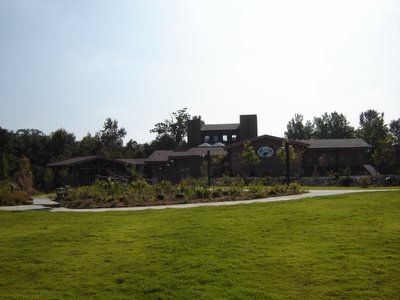 While in Arkansas last month I visited the Forrest L. Wood Crowley's Ridge Nature Center just south of Jonesboro. Their website is here. My father had been telling me about it since it opened last year, knew I'd enjoy it, and got us out to see it right away. 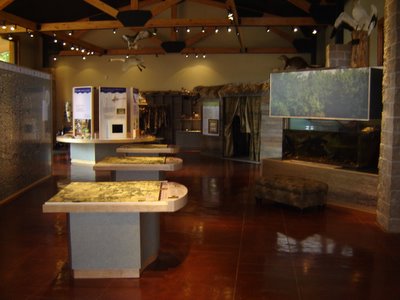 Based on his description and with my California-honed sensibilities, I expected a natural history museum - pretty much as you see in this view of the main gallery above. But there was more! 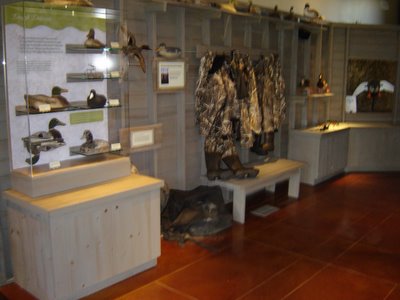 On further review it was evident that I was in a state with a strong and popular hunting tradition and in a facility run by the Arkansas Game and Fish Commission. The view above shows exhibits of waterfowl decoys and duck calls. The camo clothing and waders on the clothes rack are there for children to try on and wear in the simulated duck blind that is set up just around the corner. There was also a big exhibit on turkey calls. No one here is the least bit worried about educating children on the benefits of hunting in the context of the natural history of the area.

One more thing showed me I wasn't in California anymore. A rack of free literature on the wall was composed mostly of wild game recipes. If the picture above isn't clear enough sample titles are: Recipes for Rabbits, Cooking Doves, Cooking Venison, Recipes for Bear, and my favorite, Marsh Bird Medley - Cooking Snipe, Woodcock, Coot, Rail and Moorhen. I knew Steve and Matt would approve! 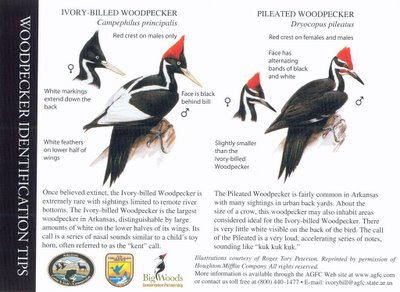 But it wasn't all about hunting. People in the area are very excited about the rediscovery of the believed extinct Ivory-billed Woodpecker in the Cache River bottoms south and west of here. These fliers show how to tell the Ivory-billed apart from the common Pileated Woodpecker. My grandfather used to take me fishing on the Cache when I was a little boy and I like to think that I heard or saw one on one of those trips. 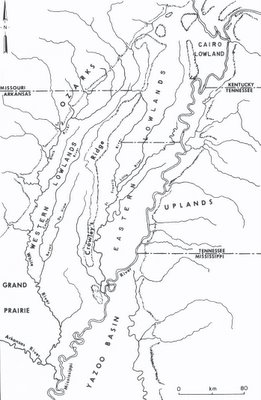 Crowley's Ridge itself is a very interesting geomorphic feature and you can see it on the map above that I borrowed from Morse and Morse's Archaeology of the Central Mississippi Valley. It is a loess ridge approximately 200 miles long, stretching from Cape Girardeau, MO in the north to Helena, AR in the south. It varies from a half-mile to 15 miles in width and stands from 120 to 220 feet higher than the river floodplains that surround it. Crowley's Ridge is the only natural high ground between the Mississippi River and the Ozark Plateau.

The loess that composes it is silty soil derived from "glacial flour" dropped by the retreating continental ice sheets of the last glaciation. It is a distinctive red-orange color totally different from the dark alluvially-deposited soils that surround it. Until 16,000 years ago, the Mississippi actually flowed west of Crowley's Ridge, in the lowlands drained by the White River today. The confluence with the Ohio was at the south end of the Ridge, near present-day Helena. The Mississippi broke through the highlands at a place called Thebes Gap in a flood event to take its present course (see Cairo Lowland area on the map) and capture the Ohio River channel. The Mississippi was a very different river in those days - a braided stream, choked with sediment load from the melting glaciers.

To honor Odious' request for a coot recipe (see comment below) I put up the recipe I obtained for "Whitebill Stroganoff." Results not guaranteed! 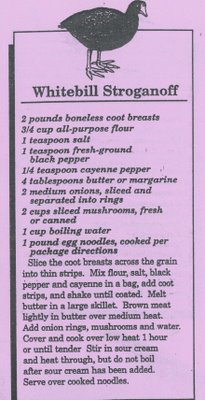 I hope you grabbed the recipe for coot. Dumas claims that only the male can be eaten, since the female has a "wild marine flavor" which has never been overcome. "The greatest chefs have attempted it", but the nearest they came to success was "coot with chocolate".

Coot meat can't be too much askew of rail, and I'll claim that rails are good eats. I've had soras, kings, clappers, and virginias, from both salty and freshwater marshes, and they all have a remarkably consistent flavor. It's a similar taste to mourning dove, but without that slight tang doves have. They are mellow fellows, alive or on the palate. :-)

I'll have to copy this flyer and mail it to you, Matt. The other recipes are Rails & Rice, Timberdoodle Grill, Snipe Saute, and Moorhen & Smoked Sausage Gumbo

I was googling crawley's ridge and came across your review of the State Park...it's quite interesting to see how someone from California would think about a Arkansas site...pretty funny stuff;
My recipe for Coot: Pound breasts to tenderize and soak in buttermilk over night, secure a pinewood plank and moisten it with a spray bottle of water, fire up the grill, place plank on the grill and sprinkle with salt and pepper, spray with pam, take the Coot and toss it out...eat the plank...has more flavor...LOL...HAH..

New England recipe for Coot - build fire pit with bricks, as Indians had taught Pilgrims to do with Lobster, using stones. Wrap Coot in cabbage leaves. When fire burns down to ash, put coot on hot bricks. Cover with tarp. After three hours, throw away the coot and eat the bricks...