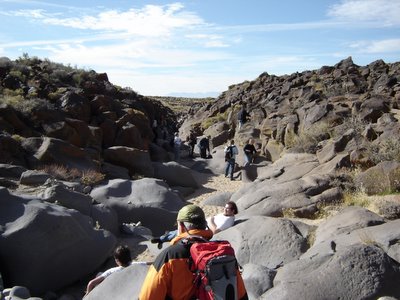 In conjunction with the Society for California Archaeology Data-Sharing meeting in Ridgecrest, CA last week-end, a tour was arranged for us at the nearby Coso Rock Art District, a National Historic Landmark. This is a world-class archaeological resource that is located on the China Lake - Naval Air Warfare Center. The fact that this important resource is located near a bombing range has limited access and saved it from destruction.

I want to thank the SCA and Russ Kaldenberg, Base Archaeologist at China Lake, for allowing us to have this rare opportunity. 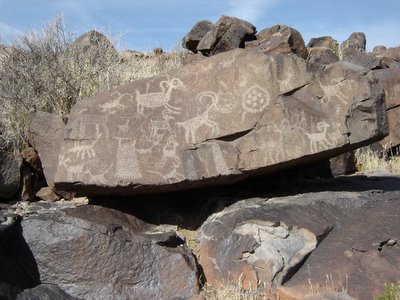 I had been reading about this area for years, but the sheer impact of the tens of thousands of petroglyphs was just astounding. Our tour went through Little Petroglyph Canyon, only one of several areas within the District. This rock art was made by prehistoric hunter-gatherers who lived here on the western edge of the Great Basin starting (apparently) at the end of the Pleistocene up until the time of European contact. Most of it appears to be oriented toward hunting magic, with an emphasis on bighorn sheep. There are thousands of images of sheep on the canyon walls. 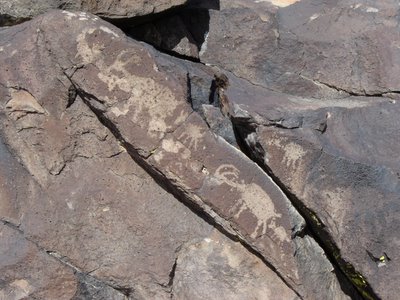 This one is of ewes and lambs climbing a hill which the artist has cleverly represented by a crack in the rock face. There are also many images of hunting weapons: spears, atlatls, and bows. 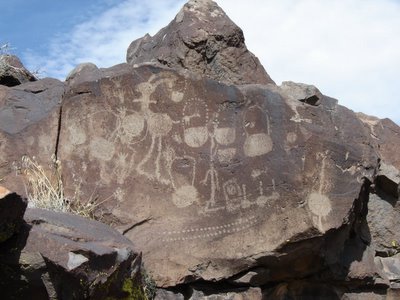 There are also elements and implements of magic like the medicine bags that look like purses in the image above. A number of books and many, many journal articles have been written describing this rock art and positing theories on its age, style, and function. There is much too much for me to cover in one post. This is a preliminary to let you know that I will be covering a number of aspects of Coso rock art in the future. In those I will link to and reference the wide literature on the subject, lots of it very accessible to amateur and professional alike. 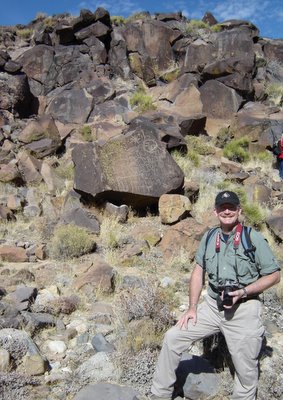 As you should be able to tell from this picture, I was pretty much a kid in a candy store for the five hours we were there. Between my colleague Christine Hacking and me, we took about 400 shots of the area. We could have stayed another day or two and not seen it all. Look for the shamans on the rocks on the skyline behind me. 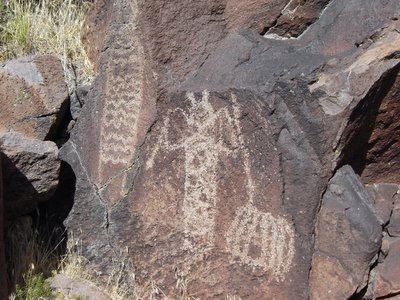 I'll close with this image of two shamans wearing ceremonial garb and headdresses. One current theory posits that this area was where a shaman would hold his vision quest and then commemorate it with rock art images. But more about that later.
Posted by Reid Farmer at Wednesday, November 09, 2005

Narcisse Blood, a Blood (Blackfoot) language educator and cultural leader, went to Writing-on-Stone last summer with some old Blackfoot speaking people and a couple of archeologists. He said that the cross-connection -- interpreting through the language -- was so much richer and so much more rewarding than anything he had done before that he went back home, quit his job, and is now back to work on a Ph.D. Wants to be an archeologist.

Reid--- Are the theories of rock art function and representations based on analogy to current Native practices and historial accounts? Or what? I've always wondered about that?

And are there "rock art dissidents?" The guys (and gals?) who say, "Sometimes a sheep is just a sheep!"

Matt, you are right. Many theories and interpretations are made based on ethnographic information and the term is "ethnographic analogy."

Yes there are dissidents. Rock art research is one of the most contentious areas of archaeology as so much is based on interpretation rather than hard facts.

Matt,
I've got an old post with some brief discussion of the question, though I've no doubt that Reid is far, far beyond me. I'd love to hear more.

I had a brief post on the subject a couple years ago, about differing styles of interpretation of panels at Fremont Indian state Park in Utah. Perhaps Reid could elaborate.

Hi. I would like to make friends with people who enjoy archaeology. I've joined this site (archaeology) to try to meet some new friends but I wondered if you knew of any other such sites.
interested in archaeology