The Kachina Cult (also spelled katsina or katchina) is the keystone of Zuni religion. This cult appears in all the Pueblos, but is most evident and best known from the western Pueblos of Hopi, Zuni, and Acoma. Kachinas are spirits, in some cases those of ancestors, who carry prayers from the people to the gods. They appear in ceremonials, usually dances, at critical times of the year. Individual kachinas are associated with particular clans within the Pueblo. Members of those clans don masks that represent the kachinas, and in wearing the mask the spirit of the kachina takes over the person. They then participate in the ceremonials.

Chuck Adams, a graduate school colleague, has an excellent discussion of the Kachina Cult and its time depth in this book. Kachinas have very regular iconography that identifies them, and they can represent animals, ogres, imaginary spiritual characters, and even members of other ethnic groups. The rock art shown in the following images is from Zuni and represents kachinas. A detailed narrative on these is this book by M. Jane Young that I have linked to before. 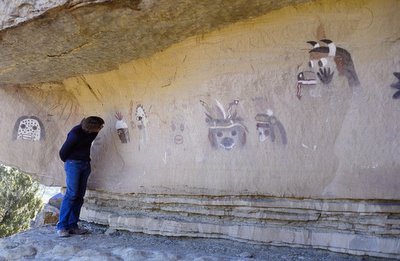 These pictographs apparently date from late Nineteenth to early Twentieth century and have been continuously renewed. There is a lot of overpainting and faded paint on the exposure. Young's book has a series of historic photographs of this exposure that shows images appearing, fading over time and there replaced by others.This overhang is located near a prehistoric archaeological site known as Village of the Great Kivas. 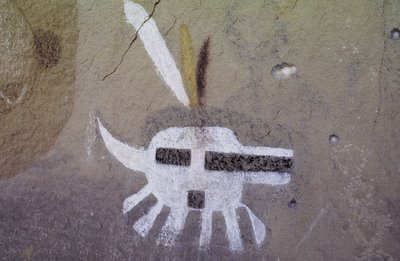 This is the mask of Sayatasha, the Long Horn kachina. The drawing below, from Matilda Coxe Stevenson's work on the Zuni from the Bureau of American Ethnography's 23rd Annual Report, shows him in full dress: white buckskin suit, turquoise plaque pendant on silver necklace, with a bow in his left hand and deer scapula rattles in his right. 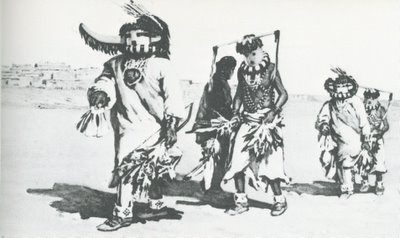 Sayatasha is attended by two Yamuhaktos (with cross-stick masks) and Hututu (also in the white buckskin suit). I have been fortunate enough to attend four kachina dances at Zuni, and have seen Sayatasha and a number of other kachinas depicted here. They are powerful and awe-inspiring performances. 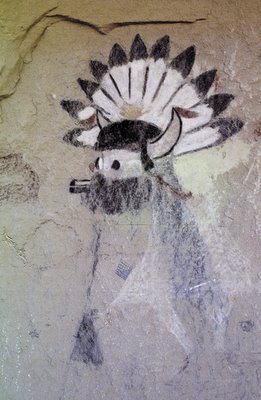 This is another very important character in these ceremonials, a Shalako. Shalakos are couriers from the rain gods who visit the village in an important rite held in late November or early December each year. They are large bird-like creatures with clacking bills. The impersonator stands in a teepee-like structure holding a pole that supports the head. The pictograph even shows the cloth grill that the impersonator peers through to see where he is going.Here is a Coxe drawing of one. 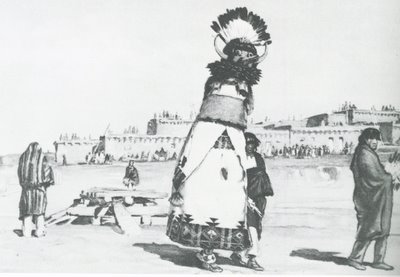 Four to six of these Shalakos appear for the ceremonials on an evening. Each has his own purpose-built house with a sunken floor where he dances through the night. Sayatasha and his attendants visit each house, as do a string of other kachinas. At dawn the next day, the Shalakos assemble on the banks of the Zuni River and race one another. 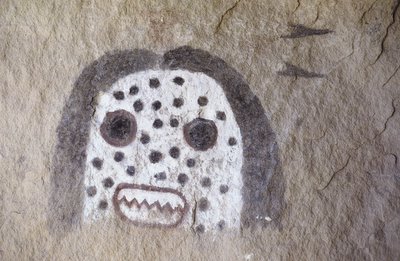 This is Atoshle, a male "scare" kachina, an ogre. Ogre kachinas of various types lend some elements of social control. They are particularly liable to visit incorrigible children. 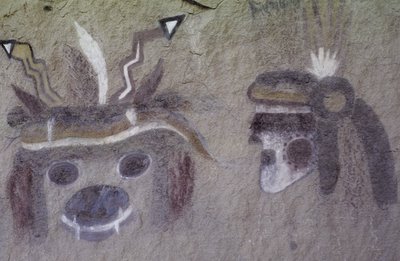 The kachina on the left is Wo'latana, the Bear. As I said earlier, kachinas can also represent other ethnic groups, like Wilatsukwe on the right, who is Apache. 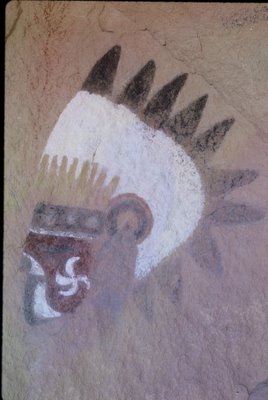 This is another ethnic kachina, Kumance, a Comanche. I was fortunate enough to see a group of ten or so Kumance at a Shalako dance. They wore full white buckskin suits, like Sayatasha and Hututu, and held rattles. Their apperance is quite rare and we were told that they appeared that year to counteract bad luck from the previous year's ceremonial where one of the Shalakos had toppled over. 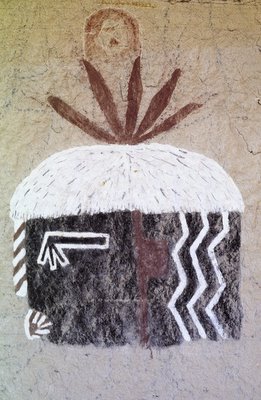 This is Hehe'a, the Blunderer kachina, a clown. The most famous clowns from Zuni, the Koyemshi, or Mudheads, do not appear in any images here. 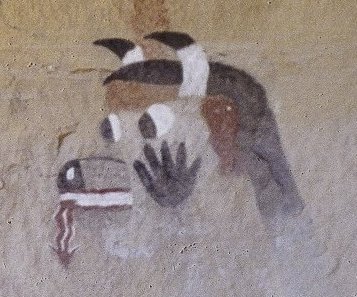 I close with this kachina, who shows the adaptability of Zuni religion. He is Wakashi, the Cow kachina. Wakashi is obviously a post-European contact development, and his name comes from vaca, the Spanish word for cow.