Steve's Flint Cores - The How and Why 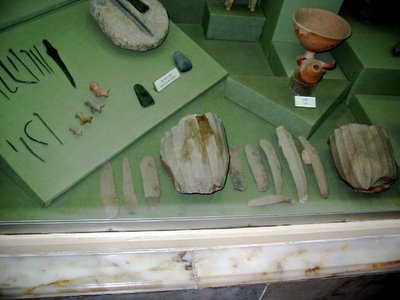 Knowing how much I like messing around with these things, Steve took this picture of two prehistoric flint cores in a museum in Turkey and sent it on to me. These are both very nice specimens and you can see the parallel flake scars down the sides and examples of the blades that have been driven off of them. A core is a piece of homogenous lithic material that has had flakes removed from it. It's primary purpose is to provide flakes that can be used to make tools. In this case I am calling the flakes "blades" simply because of their long thin shape.

Cores can come in lots of different types described by the pattern and types of flakes that have been struck from them. Above are: a) single platform pyramidal, b) opposed platform cylindrical, and c) radial. These are by no means all the types and frankly most that you find are expedient, where a few flakes have been struck off wherever the flintknapper could get them. But the cores in Steve's picture are the type a) above - and the platform refers to the surface that was struck with a hammerstone or antler billet to drive the flakes. The arrows show the direction of force.

After the blades are produced, they can be used for lots of things. First they can be used as cutting tools as they are - they look like straight-razors, don't they. Quite often one side will be intentionally dulled to make it easier to hold and then it is called a "backed" blade. Here's one where one of the lateral margins has been chipped to dull it. The fresh edges are much sharper. 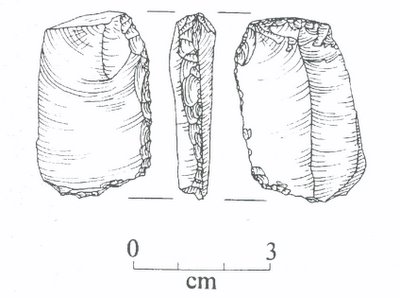 They can be further chipped to the form of a formal tool such as this projectile point.

This is an obsidian point from Catal Huyuk, a site we talked about yesterday. There are of course a wide variety of tools that can be made this way such as scrapers, drills, burins, knives, etc.

A common use of these blades in the Middle Eastern neolithic (whence Steve examples come) is as cutting edges in sickles.

This is a reconstructed example where you can see the blade segments set into a sickle that can be of wood, antler or bone. The stone pieces are almost never recovered still in their setting. Their interpreted use is usually based on a silica polish on the cutting edge called "corn gloss". This comes from silica fragments imbedded in plant stems cut by the sickle.

The manufacture of blades as shown by Steve's picture is only one of a wide variety of techniques for making chipped stone tools that have been used in human history. The blade technology does appear at different times all over the world. The Maya were particularly adept at it, using obsidian as their preferred material. I am more familiar with a local example. 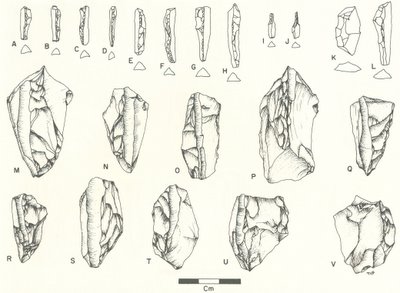 These examples are Late Prehistoric Chumash blades (A-L) and cores (M-V) from the Channel Islands. But check the scale in the drawing - these are much smaller than the cores and blades in Steve's picture. These are actually "microblades" specifically produced and used for the manufacture of shell beads. You can see that the tips of some of the blades above have been modified for use as drills or borers.

Shell beads were a staple of Chumash art and trade. Beads were made of a variety of shell types but the most common were Olivella shell. 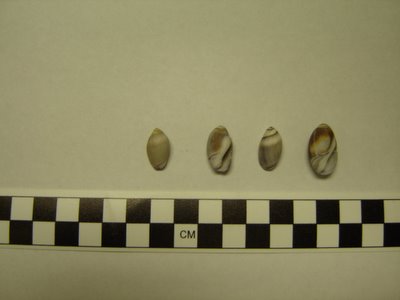 You can go to any beach around here at low tide and see lots of them. Here's a few that I have picked up. Their name comes from their resemblance in shape and size to olives. These were sometimes simply drilled and strung whole or could be cut down into a wide variety of shapes and styles. These styles often changed and can be chronologically sensitive "type fossils." Styles correlated with radiocarbon dates can be used to help date sites. 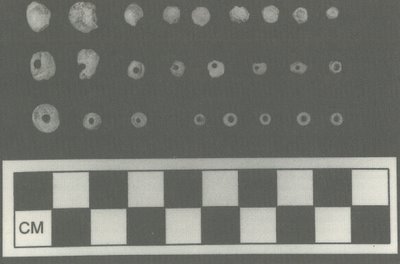 These beads were traded all over prehistoric California and further into the Western United States. 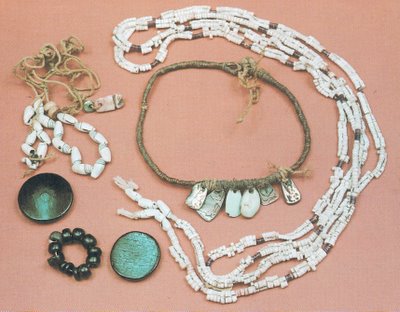 This shot is of some beautiful Anasazi (Ancestral Pueblo) jewelry from Northeastern Arizona, a good 700 miles from here. Whole Olivella shell beads are plainly visible in the left side of the picture. Beads like this have been found as far away as in sites in Eastern Oklahoma. Anasazi painted ceramics have been found in the Chumash area in caves in the Santa Monica Mountains, showing trade going the other way. One of the things I find interesting about that is it is almost certain that the Chumash were quite familiar with agriculture and with ceramics and wanted nothing to do with either. But I'll save that for another post.

Some of the images used above came from George Odell's Lithic Analysis, William Andrefsky's Lithics, Jeanne Arnold's (ed.) The Origins of a Pacific Coast Chiefdom, and Wesley Jernigan's Jewelry of the Prehistoric Southwest
Posted by Reid Farmer at Tuesday, January 10, 2006