Eagles suddenly seem to be ganging up on me in some kind of Jungian synchronicity..

First, reading this Odious and Peculiar post this morning, I was directed to an amazing blog by an English evo- bio scientist. It is the best zoological blog out there, period. Try Peculiar's links for a sample-- the wonders of snapping turtles, the weirdness of rabbits-- I had no idea! (By the way, why are the younger English science people, like Darren and Pluvialis so much more literate and historically- minded than their American counterparts?-- I exempt Peculiar who in any case is not a science pro any more than I am).

One of Peculiar's links to Darren was on Spectacular Eagle Predation, or as Darren has it, "When Eagles Go Bad". I commented there at somme length, and he replied asking me for some photos. When I went back to the rest of my e-mail I found this image waiting, courtesy of Anne Pearse Hocker via Matt: 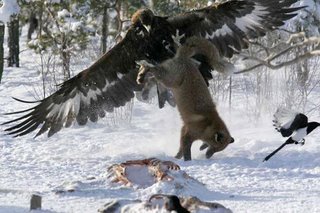 A Golden eagle attacking what appears to be-- I thought a young coyote but (re Mary's comment below) may be a large fox.

It seemed a worthy compliment to this pic of my friend Manai, seen here with his eagle and (hanging on his house in Mongolia) a skin from a wolf killed by her. 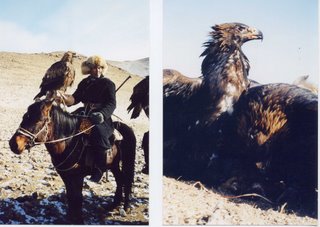 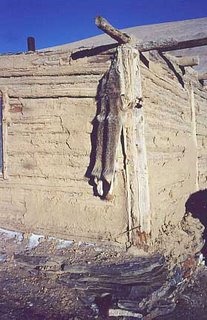 I had a long correspondence unsuccesfully trying to convince ancient shooting guru Jeff Cooper (whom the Alpha Environmentalist mutters should have perished in the Cretaceous Extinction Event) that eagles can kill wolves.

Think flying Velociraptors...
Posted by Steve Bodio at Wednesday, May 24, 2006

Steve, that doesn't look like a coyote the eagle has in your photo -- more like a fox, though it might be a young coyote, I guess.

Our eagle killed a domestic cat now and then if it got in her cage. She was weak-winged, since she never got to fly. If we were keeping her now, we'd do things differently, I think. But she did lift cats and rabbits around her cage. And from the first moment we had her as a baby, she routinely "parted-out" any animal she ate. Guts first, then legs, and finally even heads if they were small enough to get into her gullet.

"(By the way, why are the younger English science people, like Darren and Pluvialis so much more literate and historically- minded than their American counterparts?--"

Because, good friend, they most likely didn't grow up in Kansas where students are taught that the world is flat, and all science is the devil's handmaiden ...

I'm feeling a bit sour today ... I'll look at this tomorrow and see if I've changed my thinking at all.

For Mary-- you may well be right-- I looked at it again (small image size). But they do kill coyotes too!

For Anonymous-- it ain't (just) that. Peculiar grew up in Montana, and he is fine, but I know rich California and New England kids who went to private schools and don't know a thing. And they are even more ignorant of history.

Most public schools in the US are teaching NOTHING, not just the ones in Kansas (and the Kansas flap has caused a revolt amonng science teachers, a Good Thing).Remember, when "Intelligent Design" went to trial, it lost.

Steve, this is a million dollars industry in the (...) area if you get your eagles there!

We're heading to Mongolia next year so maybe we'll see some of this in person.

I think that many biology students are so focused on the career and presumed glory of academia, that nothing else really matters. There is a careerist "hamster wheel" that seems to glorify frantic living, self-induced stress, being too busy for ANYTHING (including reading, family, life, etc), constantly attached to cell phones and "blackberries" and a self-congratulatory, never-ending monologue celebrating careerism and its anxieties. If you are not actually working, you must impress your friends by telling them how much you're overworked and unrecognizable to your kids.

By my observation, many perceive this shtick to be a key formula to success in organizations today, whether in the academic, corporate or NGO worlds.

We rejected that, and Jennifer gave up a career in academia to have a life. So I don't think it's that literate American biologists don't exist, they're just tucked away in the backwaters of the country. We have encountered many others who have made similar decisions.

The leg length in proportion to body size makes me think it is a coyote.

Matt M-- didn't mean to imply that there are none here, but many of the under- 30's I have met seem awfully one- track-- which may be what you mean. The reson I am not a scientist today (and probably why I am so poor, at least in part) is that I had far too many interests when I was in school-- was actually told that once! Darren and Pluvialis obviously were not.

Also, their fascination with the HISTORY of science-- one I share-- is not encouraged in universities here today.

Look at the examples we have here-- your wife, Matt, me, all outside the academy. And Reid, though not a biologist, makes four!

M. Makarewicz-- my first impression, often the best when id-ing an animal, was coyote. Mary made me think-- the tail could have a white and does not have a black tip, common in coyotes. The ears seem short for either--?? It's big for one and smallish for the other. (I wish I knew the sex of the eagle, which would say something about size). And both coyote and red fox are common in the Greater Yellowstone. I wish it were not in the shadow.

A frequent theme in Wendell Berry essays is error resulting from over-specialization.

One other observation: the one-track scientists are not only ignorant of history and literature, but also often are extraordinarily hostile to religion. But that's another topic.

"The reson I am not a scientist today (and probably why I am so poor, at least in part) is that I had far too many interests when I was in school-- was actually told that once! Darren and Pluvialis obviously were not."

Well, Steve! I was told the same thing while in graduate school - my interests weren't focused enough. One reason (among others) that I don't have a PhD today.

Wow that is some action shot!!

We where out with the dogs a few weeks back when i pointed out a Roe Deer standing in a barley field, we stood watching it for a while when out of nowhere a buzzard came swooping in and atempted a strike on the Roe's head!! Roe got quite a fright!

The animal on the photo is, without any doubts, a Red Fox. Furthermore, it is actually part of a series that was shot in Finland by Pekka Komi. This photo could give the mistaken impression that the Golden Eagle is attacking the Red Fox to prey on it, but that was not the case. Actually, they were fighting for a carcass that had been laid out to attract various raptors. For some time the outcome of the fight was unclear, but in the end the Golden Eagle won and the fox ran away. Pekka Komi who took them has posted 5 photos from this series on Tarsiger (if I remember right, there are more that weren't posted):

golden eagles are great, no doubt about their capabilityes....but what about the african crowned eagle, it seems to be as powerfull as the harpy eagle, despite it's smaller tham harpy?
i'm fascinated by eagles and i,m curious wich species is the strongest
thanks
Nicu Parlog from Romania