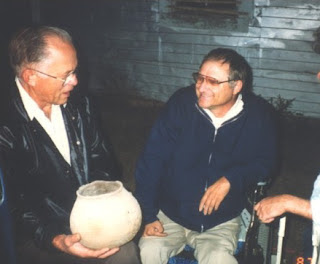 Pictured: Bill Wise and Floyd Mansell
My friend (and a personal hero) Bill Wise, of Harrington Delaware, died on the 24th of February. I wrote about him a bit here.

After breaking his neck in a surfing accident in 1965 he went on to live a life more adventurous than that of most people who have no problems. He never lost his sense of humor or his courage. He will be missed, not only by Rosalie and his kids but be all his many friends and fans. He was a constant inspiration and a reminder that we should live life to the fullest, as he did.

Below is his official obit.

Attended the University of Delaware. Achieved the rank of Specialist E-5 in the Delaware National Guard. Was employed by the U.S. Postal Service in Harrington. With Partner established one of the first surfboard shops on the East Coast in 1962 called The Eastern Surfer located in Harrington DE and Ocean City, MD and later in Rehoboth Beach, DE. Was instrumental with his wife in operating Likewise Bikini Shops in Ocean City, MD that fit and manufactured bathing suits of Hawaiian fabrics for their customers.

Mr. Wise was a lifelong sportsman. He was a charter member of the Diamond State Skin divers, a spear fishing and archeological dive group. He passionately participated in outdoor activities, especially hunting and fishing. A surfing accident in 1965 severely paralyzed him, wheelchair bound for the rest of his life. Mr. Wise was a member of the Delaware Maryland Paralyzed Veterans Association for more than 25 years. From 1979 through 1984 Mr. Wise served as President of the Board of Trustees of the Delaware Trapshooting Hall of Fame, and was a respected sporting firearms historian.

A writer and photographer, Mr. Wise’s work appeared in international periodicals, books and newspapers. He wrote weekly columns for the Milford (DE) Chronicle and The Beachcomber papers in Delaware and Maryland.

In 1996 Mr. Wise was inducted in the East Coast Surfing Legends Hall of Fame for his lifetime contributions to the sport of surfing. He was widely known in international sporting circles.

With a zest for life he traveled widely, flew gliders, swam with dolphins, and observed nature from a unique perspective.

Mr. Wise was preceded in death by his parents, Byron E. and Helen McKenna Wise.

My condolences for the loss of your friend. I enjoyed your post when you introduced him not so long ago. It seems fitting to present those hounds as company for words of him today.
-margory