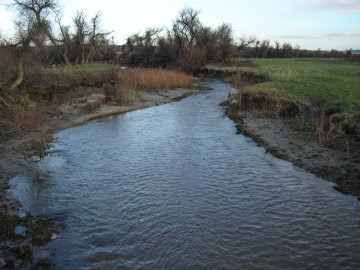 Just a few pictures and thoughts from the beginning of the week when the dogs and I were stretching our legs at the Hidden Mesa Open Space just to the west of us. We had two days of cold and snow over the weekend that gave us a White Easter, but Monday was clear and 70 degrees and you wouldn't have known it snowed except that Cherry Creek was fat with snow melt (see above). This open space area is mostly in the Cherry Creek floodplain. Cherry Creek is a major tributary of the South Platte River and the site of the original settlement that grew to become Denver is located near the confluence of these streams. The creek gives its name to a flood control reservoir where it is dammed several miles downstream of us and also an upscale shopping and residential area in Denver. 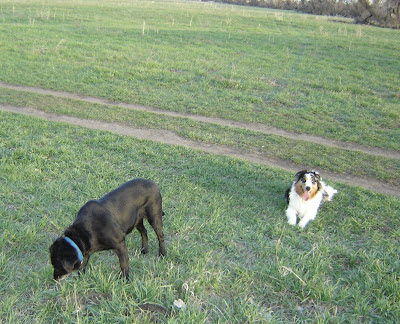 This picture epitomizes the behavioral differences between my shepherd dog and my retreiver/hunter dog: Sadie is looking to me for a cue as to what to do next and Maggie is busy checking the scent of every bunny, prairie dog, vole or meadow mouse who's scurried through in the last week. I don't think Sadie comes directly from working stock, but she carries strongly so many of the herding behaviors that I'd love to get her a chance to work with sheep.

Last week I was trying to load the dogs in the truck for one of these walks. Maggie jumped right in but Sadie refused to load. She gave me anxious, piteous looks. As I called her she repeatedly ran halfway to the front door and back, just skipping out of my reach. Turns out, from her perspective, I was trying to force her to abandon Connie, one of the "flock" she's responsible for. Sadie resolutely refused to load until Connie said, "Come on, let's go!" and pretended to get in the truck. Connie figured out what the problem was - I was too dense. 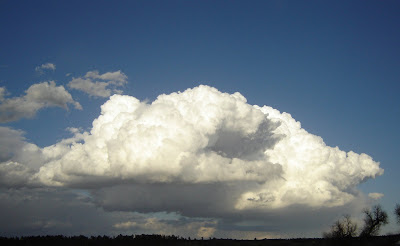 Late in the day a bunch of clouds blew in bringing a chance of showers. Living in coastal California for the last seven years, it had been ages since I'd seen these big boiling thunderheads. These are those muscular, wet Maynard Dixon clouds that the Southwestern Indians pray for for their promise of rain. 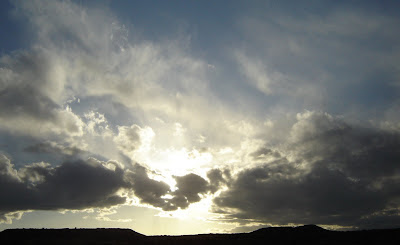 I must say, since coming here we have gotten a lot of enjoyment watching the sun set behind the mountains of the Front Range.

Oh my gosh, those pictures are gorgeous! I loved the observations on your dogs too. It makes such a difference to understand where they come from and what they're meant to do.

My friend the beef farmer had a border collie for about 12 years and after his passing got a blue heeler. He gave the dog away because he kept herding the four kids. He'd round them up in the middle of a field and nip at their heels if they tried to leave. He was just a little TOO good at his job?

It's always fascinating watching the work a dog was originally designed to do coming through in its behavior.

I have a guarding breed... turn him loose in any area with a definable perimeter, and the first thing he will do is make a complete patrol of that perimeter. If he doesn't have a lot of energy to burn on running it, after the first one he'll find the best vantage point in the area to lie down in and scan from. I have to check any gates in a playing field beforehand or with him on-leash, because he definitely will when I let him go.

Heidi
We had an Aussie when Lauren and Travis were both toddlers, and to some extent, Osa used to herd both of them around. Nothing as extreme as your friend's heeler's behavior however. Osa was always a good babysitter. When the kids would play in the yard she would lay nearby and keep an eye on them.

labrat
Aussies show similar behavior to your dog in terms of guarding a defined perimeter. Every house where we have had a fence has a path paralleling it from the Aussies pounding their beat. Same on the high vantage point. In our new house there is a gallery that overlooks the living room. Sadie likes to sit up there where she can keep an eye on us all when we are sitting there.

Aussies have a strong guardian heritage as well (which a lot of poor people who've had them touted as the "ideal family pet" don't know), so it's not surprising at all.

I grew up with herders... while their need to gather, biddability, and slight-to-great obsession with order is fascinating, I deliberately moved away from it when I got my first dog.

Of course, I traded it in for independence that can get equally irritating...

labrat
Great that you made a conscious decision as to what breed and attendant behavior you wanted! Obviously most people have no clue what they are getting into when they buy a pet descended from a working or hunting breed.