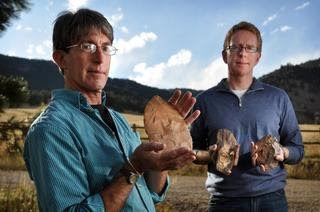 Exciting news - the Denver Post and NY Times picked it up, but the best account comes from this press release issued by the University of Colorado.

A cache of 83 lithic tools was discovered by Brant Turney's landscaping crew while they were working in Patrick Mahaffy's yard in Boulder last May. Mahaffy contacted the University and archaeologist Doug Bamforth came out to investigate and has been leading the research.

Dating this find has had to be by "backdoor" methods as there are no Clovis projectile points in the cache and no organic material available for radiocarbon assays. CU geologist Pete Birkeland (I took pedology from him back in the day) verified that the sediments were of Pleistocene age, but analysis of blood residue on the tools sealed the deal. The collection was sent to Robert Yohe at California State University - Bakersfield who performed the protein analysis. This revealed that tools had been used to butcher sheep, horse, camel, and bear. Native horse and camel have been extinct here since the end of the Pleistocene. 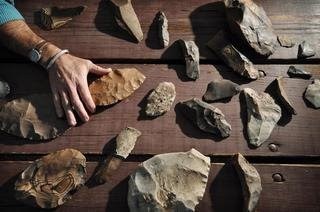 This is quite a collection and I am in awe of the giant bifacial knife that Bamforth is holding (foreground top photo). He says these tools are typologically similar to some from another Clovis cache, the Fenn Cache, from up in the Yellowstone area.

Lithic materials found in the cache come from southern Wyoming and the Colorado Western Slope, showing that these people traveled and traded. Some of the very best flint-knapping known in North American archaeology is the oldest (like this find) and Paleoindian craftsmen seem to have been particular about their raw material.

That knife really is spectacular- a lithic machete! Were knives of that sort typically hafted? (Seems like they'd haft to be, to avoid cutting yourself)

Those are so unusual, I honestly don't know about the hafting. Bamforth says it looks just like one in the Fenn Cache. I'll rummage around for my copy of that report and see if Frison & Bradley were able to figure out anything about the hafting.

Spectacular find! Interesting that were no projectile points among the artifacts.

I found a couple points when fishing the St. Vrain River near Lyons when I lived in Boulder, but never even saw a Clovis point until I found one of obsidian near the Nevada/Oregon border.

Fenn Cache is a fraud!

The stones are really spectacular. Have you used it in any of your landscaping project? Are the stones sharp? The edges look sharp to me and can cut easily?

Are you going to do a follow up article? Would love to know what happens next.