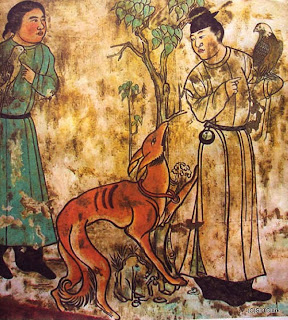 I have seen black and white line drawings of a falconer with a tazi from Prince Xanghui's tomb in Xian, on the far eastern end of the Silk Road. Though I used one on my letterhead, the hawk was unidentifiable. I assumed it was a Goshawk which is still flown in the area and throughout northern Xinjiang.

Recently I got a much better colored image, which shows more clearly that it is indeed a Goshawk. It also has an even better image of the tazi or, if you prefer, the saluki. Notice the odd Roman-nosed profile. It is still present in the tazis of the area today and was noticed disparagingly by a commenter in one of the posts below who asked if I thought "sheepsheads" were ancient. Well, here's one before 800 A.D.-- a bit after 700 I think.
Posted by Steve Bodio at Sunday, July 18, 2010