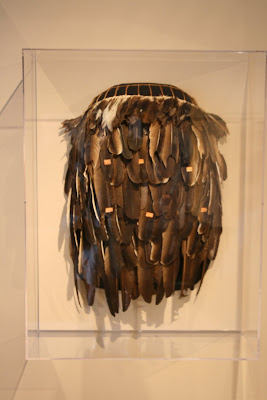 I had read in the paper earlier this year that the Denver Art Museum had totally revamped their North American Indian galleries. I was in to visit a few weeks ago, and wanted to share some new California tribal items that I saw. I thought the Condor feather cape that you see above was just stunning, and couldn't imagine why they had kept it in the back rooms all these years. It was made by the Wailaki tribe, a group on the far north coast that I frankly wasn't familiar with. 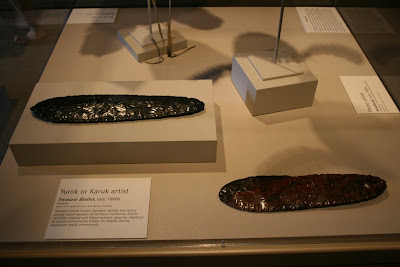 I also enjoyed seeing these two large obsidian "treasure blades" that are of Karok or Yurok manufacture. One is of black and the other of red obsidian. These served no utilitarian purpose, and were carried in various dances and ceremonials. There are a number of late 19th and early 20th century photographs that you can see in ethnographies that show these in use. All the ones I had seen previously are similar in size to these, about 18 inches to 2 feet long. They are just beautifully made - a delight for a lithic analyst like me. 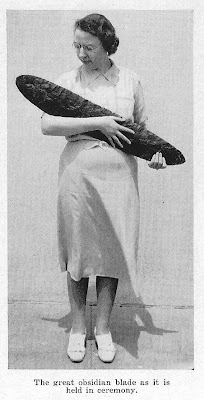 Just last week, I randomly stumbled across this picture on the internet, of an enormously larger "treasure blade" that is apparently in the collections of the Southwest Museum (now part of the Autry National Center) in Los Angeles. Pretty cool. This was published in their journal, The Master Key, back in the late 1930s.
Posted by Reid Farmer at Monday, October 17, 2011

A client suggested that I place a "nice painting" rather higher up on the wall of my dental surgery, so that she could see while dental work was being done for her. A good idea, I thought, to distract clients.
My nurse found and ordered this canvas print, http://en.wahooart.com/A55A04/w.nsf/OPRA/BRUE-7Z5Q5K, by Gustav Klimt, by browsing to wahooart.com who made our excellent print from their database of images from western art.