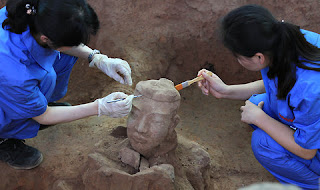 Chinese archaeologists report they have excavated more of the famous life-sized terracotta warriors dating to the Quin dynasty.

Another group of Chinese archaeologists has excavated a vessel still containing liquid wine that may be nearly 3,000 years-old.

Research into the yak genome is telling biologists quite a bit about high-altitude adaptations.

Scribners is publishing a new edition of A Farewell to Arms that includes a number of the draft alternate endings of the novel. Hemingway famously boasted that he re-wrote the ending 39 times to get it right.

Researchers find that a population of Antarctic moss is able to survive using nutrients from a 3,000 year-old penguin guano deposit.

One of Laura Niven's colleagues at the Max Planck Institute for Evonlutionary Anthropology has been able to establish that a species of Australopiticines subsisted on a diet heavily dependent on eating bark and wood.

I posted earlier in the year, about archaeological research in Amazonia that is showing the area was densely settled by advanced agriculture-based cultures during prehistory. A recent study of pollen and phytoliths taken from soil cores collected in the western Amazon Basin however is showing little evidence of domesticated plants in that area. This surprise discovery may indicate there was a limit to the western spread of the agricultural populations.

Archaeologists in Spain have discovered another possible example of Neandertal cave art
Posted by Reid Farmer at Friday, July 06, 2012

The studies I've seen on yak DNA show that yaks are most closely related to bison, and the genus Bos, which includes all the south Asian cattle, save the water buffalo, and all domestic cattle is paraphyletic. You have to include bison in Bos to make it a clade.