For those keeping score at home, I'm now two for two at perpetuating bogus memes on this blog.  My next post, should there be one, will contain only factual content (Boring, yes, but safer.)
--Matt Mullenix

A Facebook friend forwarded the above video footage.  Perhaps you've see it, but it was new to me.

The bird is identified as a Golden eagle and the location as Canada.  The video was posted, at least in this instance, yesterday by a YouTube subscriber named MrNuclearCat.  No idea who, when or where, this scene actually represents, but I'd love to know more about it.

Quick observations: It strikes me as a natural sequence, although obviously remarkable and curiously well timed camera work.  If it's a wild eagle, it is one that has evidently hunted parks before, perhaps for stray pets; the flyover and quick turn into a dive, and the general disregard for bystanders makes it seem like habituated behavior.

Is it a Golden?  It would have to be that or a Bald in Canada, although I guess a Stellars is possible.  And of course, if this is artificial, it could be anything from anywhere.  I have to say that the color patches and wing shape seem odd to me, but a Golden would be my best guess too.

Of course, my powers of observation have failed me before.  :-)

Thoughts, anyone?  BTW: the child seems to have been unhurt. 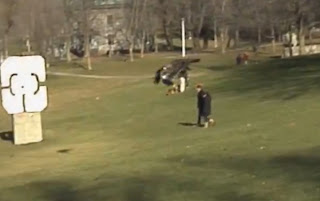 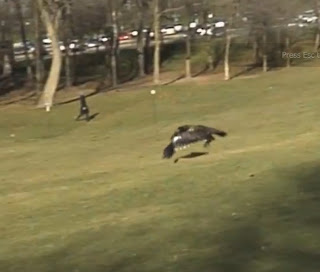 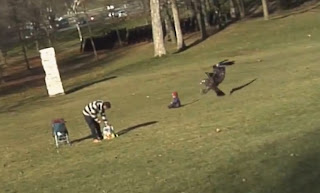 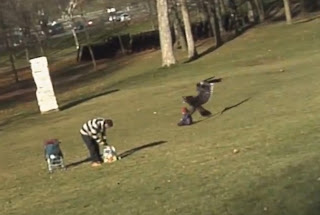 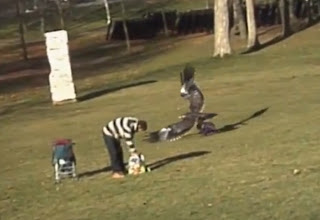 It's a fake. A falconer friend who lives in Montreal says it never happened, it was created by someone who has a lot of skills manipulating images. PSD

On the YouTube page for this - someone pointed out that the shadows are inconsistent. As the camera pans from right to left past the funny sign or sculpture you can see the sun must be in a different spot for the second part of the (supposedly continuous) shot.

!. "'A golden eagle tries to snatch a baby in Montreal,' and the video goes viral. But it's faked. Golden Eagle is a scarce visitor in the Montreal area, but the bird in the video is not a Golden Eagle, nor anything else that occurs in the wild in North America. This was clearly a setup: using a falconer's bird, and probably a fake toddler for the distant scene. With all the ignorance about nature that's out there already, the last thing we need is this kind of stupid garbage." Yes -- that Kenn Kaufman: http://www.kaufmanfieldguides.com/KennKaufman.htm"

2. "I'm sorry this is staged, if only because -- to a certain extent --
it negates the genius comment made by someone after Gawker posted the story:

'This all could have been averted if the baby had its own eagle.' "

So far, popular opinion has this as a fake. In that light, I do hope it's CGI and not that someone has trained an eagle to stoop at baby-shaed lures. :-)

Somehow, the wings(especially in the last frames) look "wrong" for a Golden Eagle....but there you go--the NEXT killer creature schlock horror movie! I just borrowed ONE OF THE BEST in that genera I've yet seen(and I've seen a lot!)--Cat Urbikit especially should take note here(if she hasn't seen it already!)--a New Zealand film called "Black Sheep", with--you guessed it--genetically altered carnivorous killer sheep! And the whole dilemma was instigated by a pair of bumbling, self-righteous AR's that went meddling where they shouldn't have! HIGHLY RECOMMENDED! I actually laughed out loud throughout the movie!....L.B.