Captain John Brandt, military man, ethnologist,  zoologist, hunter, and rancher, died a couple of weeks ago, just short of his 86th birthday. He was my "other" sponsor for the Explorers Club, (the first, Father Anderson Bakewell, has been profiled here more than once). Both lived lives of adventure and scholarship of a kind that may no longer be possible. 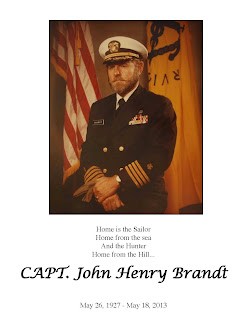 Brooke Lubin (whose credentials include a life of adventure even rarer in my generation) touched a few biographical points in her contribution to his memorial. Correctly calling him "gregarious but discreet", she noted: "...It might take one years to realize the 'Ret. Captain' John Brandt stands for a Naval Captain who specialized in counter- intelligence and counter- insurgency in some of the remotest, most exotic corners of the earth for three decades covering World War II, the Korean War, and Vietnam...[he lived with] the Malayan Semang Pygmies. In Borneo he spent time with the Iban..He knew the Akha of Thailand, and his contribution to the understanding of the Chimbu of New Guinea led to his election to the membership in the Explorers Club in 1961." This on top of the fact that he was a zoologist whose PhD was in Environmental Biology from Tulane!

He was also a hunter- naturalist and writer whose books include Hunters of Man, Horned Giants, and the magisterial Asian Hunter, the last chronicling much that has been lost forever (and as a bonus, that one features Father Bakewell on the huge sloth bear that mauled his leg, beginning with Kipling's poem "The Truce of the Bear").

In John's retirement he raised cattle in the San Luis Valley, the most beautiful valley in Colorado, and thoroughly enjoyed the rancher's life. We saw each other all too rarely, but he kept a strain of fascinating letters going as long as he lived. Perhaps it would take a Kipling or Roy Chapman Andrews or a Teddy Roosevelt to write a proper epitaph for him-- like Bakewell, he belonged to another, more confident era. I remember him standing in the hall at the Explorer's Club banquet. With his proper military kilt, his medals, and his curled 19th century mustache, he made the rest of the crowd look drab, telling tales that were remarkable not least because they were from a life 's happy work and not just a rich man's whims or play.

He is survived by his wife Dorothy, his best companion for almost 66 years. Raise a drink for a life well- lived. 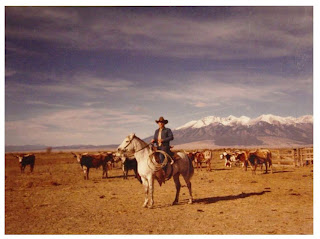 An obviously amazing man - and a fellow Tulane alum to boot

He sounds like a fascinating man. The comments on his experiences make him sound like a character from a John Buchan thriller.

I have Hunters of Man and have long lamented not buying Horned Giants--I'm fascinated by the wild cattle. It is now nearly impossible to find that title and I don't think many were printed.

A Horned Giants bonus: Father Bakewell in buckskin fringe with .416 Rigby and bison in NWT!

Where was his ranch in the San Luis Valley?

Not far from Alamosa.

Steve, your sponsor led an impressive life. The Explorer's Club? Steve, I am impressed with the company you keep. ;) I know one man, long deceased, who was a member. His fishing buddy either led or was on the expedition in 1969 that recovered Capt. James Cook's cannons that were tossed overboard in 1770 on the Great Barrier Reef when Cook's ship, the HMS Endeavor, ran aground on the reef. In contrast, my fishing buddy swings a hammer for a living. Gil