Tazi puppies are many things, but rarely restful or peaceable. As Libby says, they are not beginners' dogs.

Though I maintain they are not TOO bad. I know, one was called "The Shredder" and one of my favorites destroyed seven Bonsai plants I had been nursing for years because she was jealous (I watered them) and one little one still tries to beat her up, but...

These are Vladimir's remaining boy pups.

I think David Zincavage is exaggerating when he reacted to this photo by saying "From my own experience with Uhlan, I think this video pretty accurately describes Khazak tazys' temperament and behavior":

On the other hand, here is Uhlan trying to understand why David and Karen will not let him bring the remaining half of his not entirely fresh woodchuck into the living quarters. 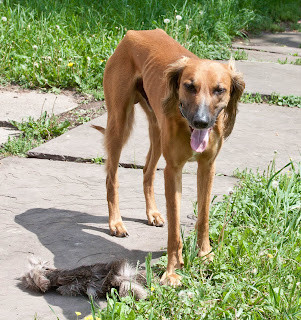 How can you not love them?
Posted by Steve Bodio at Thursday, September 05, 2013

Not for beginners? Steve, if you want a *hunting hound*, it lives in the kennel, and it's easy as it may. If you want a *hunting pet*, it's even easier. It will help you decide whether what you actually value and care for in life. I shed plenty 'irreplaceable' to a pup. Do I care?

That's what Buddhists mean with non attachment. Stuff is eaten by dogs, broken by family and friends, sanded down by the wind, frozen by the mountains, lost by the prairie, burnt off by the sun, washed away by the rain. So you are left with dogs, family, friends, sun, rain, wind, prairie and mountains. What more do you what?

Federico: EXACTLY. I may quote you. I think David, though he jokes about it, may be getting there too, slowly.

I had a Bonsai once too. Then I had a litter, and they had lunch.

I always tell people you don't get a Saluki(Tazi), Basenji, Siberian Husky(or any other somewhat more demanding breed/type of canine) because you want a DOG, you get them because you want a SALUKI(TAZI)--etc. etc.--and you do your research and find out what that entails, and adapt YOUR life thereafter to that! NO EXCUSES in this day and age for not finding plenty of information on ANYTHING! I think the difficulty for many humans is not realistically applying garnered information to their actual lifestyles. I have found all my sighthounds perfectly reasonably tempered--even rather "enobled"(to be perfectly, but ACCURATELY anthropormiphic!) compared to other dog types I've kept--even my Azawakh, who, typically Azawakhian, tended to nail(with his teeth) anyone who came up unnanounced on my property--which I expected, having read about Azawakhs, and in no way considered that a bad thing! No way would I think ANY of my canine companions were anything like the Marty Feldman sketch--especially not the deeply sensitive, noble Tazis! I think maybe David and Karen are just too persnickitty about their cave!....L.B.