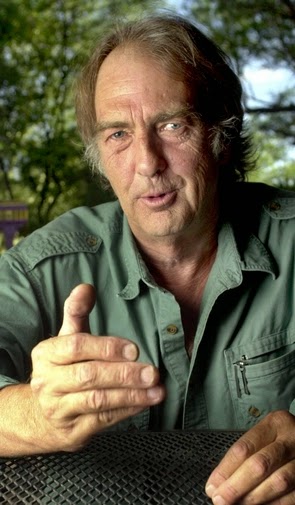 "... But I don't think so", as he wrote of his old friend Edward Abbey in my favorite of all of his works, Desierto, the closest thing he ever wrote to a nature book. The inscribed flyleaf (double or right click to enlarge) beneath his terrifying later Murder City, is in that book; he had read my old novel manuscript, and was impatient that nobody would publish it... this would be in the nineties. But publishers' tastes were not as robust as Chuck's. 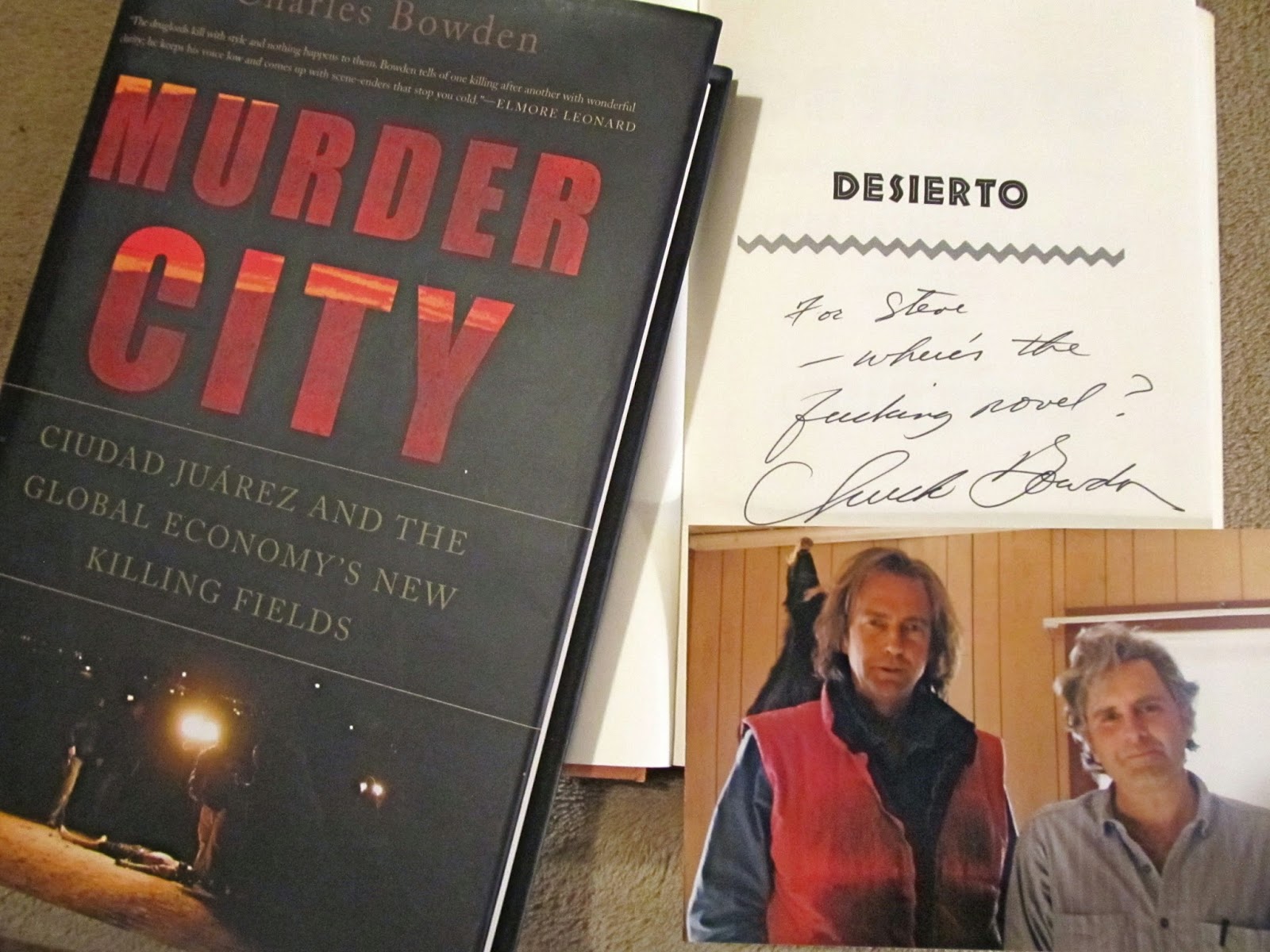 If we had lived closer we might have been closer friends, though both of us, he even more than I, needed solitude as well as gregariousness. We talked, but had not seen each other face to face in  a decade or more. As it was, we were admirers and advocates for each other's work who enjoyed drinking and furious talk and shared tastes in landscape and writing and firearms and even in women. He had an attitude that could be ironic but never cheap. The first time I met him he had a Deadhead skeleton sticker with a rose in its teeth on the left end of his pickup bumper and a sticker that read "Ted Kennedy's car killed more people than my gun" on the other.

(Re his partisanship, a letter dated 27 Sept 2000 : "I press Querencia on perfect strangers. I am a missionary at heart.")

Another taste from another old letter: "I bought something the Italians call a superautomatic which grinds the beans, tamps them down, shoots one or two shots through them, and then tamps down the grounds-- yes, I am lazy... soon, the process should be as swift as jabbing a needle into my arm... And like your  weaponry it is something I can ill afford but apparently there is nothing to be done about it."

He ventured into places where armed police and even the Mexican army stayed out, blew the lid off the most brutal yet ignored crimes, interviewed 17 year old assassins and serenely corrupt politicians, wrote essays about the innocence and deadly beauty of rattlers and mountain lions. I always feared that he would be hunted down by the cartels, but hoped he would go on one of his long walkabouts in the desert that refreshed his soul, at about 93. Instead he apparently died in his sleep yesterday at 69 in his Las Cruces home. Weirdly, I had begun his last book, Some of the Dead are Still Breathing,  just the day before, and intended to write to him, rather than write his obituary, tonight.

Update: his friend Jack Dykinga does a much better, and darkly hilarious, version here. HT to Jonathan Hanson.
Posted by Steve Bodio at Sunday, August 31, 2014

I envy your friendship and correspondence with him, Steve. A writer I admired no end, and yet never had a chance to meet. Regret, mixed with sadness. We've lost one of the great ones...

Bowden was a badass. I'm not surprised to hear you were friends. Thanks for teh fine obit.

I respected him as a journalist, a writer and as a person. His death impoverishes us all. Thanks for your sharing here.

There's a story in the NYT today that serves him well - including his great quote about "environmentalism."

PS Is your email back on line?

Thanks, Andy. Back and working.

The quote is: "In an interview with The Times in 1991, Mr. Bowden said he once made a publisher remove the word “environmentalist” from the dust jacket of one of his books. “Environmentalism,” he said, “is an upper-middle-class, white movement aimed at absolution and preserving a lifestyle with a Volvo.”