I very nearly used Libby's not unkind but perhaps too accurate term "gun porn", but quailed at putting it in the title,  fearing just what search engines might send people here. The Stephen Grant 16 is all cleaned up-- mechanicals by John Besse, wood by me-- safe to shoot, and pretty-- now I must decide what else if anything to do to bring it back to life. One set of numbers suggests it was made in 1868, but given its signs of being a converted pinfire, I must wonder if that was when it was converted. But the fine scroll is a mostly 1870 (and later) characteristic.

It really is a BEST gun though-- airy balance right on the hinge pin. Adding removable Briley Titanium tubes in 28 wouldn't get it to 6 pounds!

Here it is with its fellow 16's-- a square- backed Browning from FN in its first year of production, a 30's Belgian guild gun made for Stoeger in the 30's and sold at Abercrombie to my friend Gerry, or rather his grandfather, when he was 13, Soon afterwards, his mother took it over and shot enough Yankee grouse with it to shoot it loose. Look how much deeper a typical Anson and Deeley action is than that of a back action sidelock. 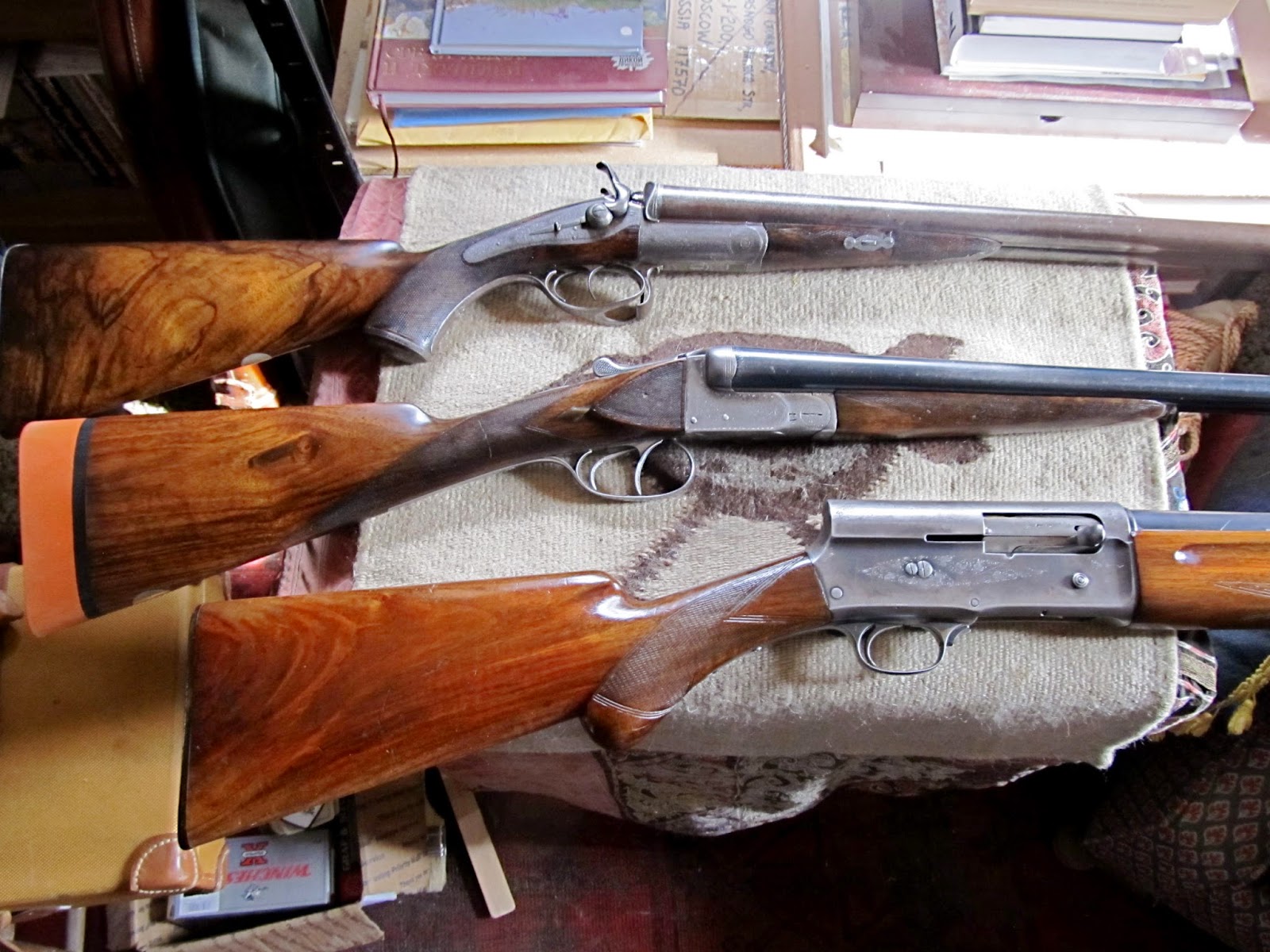 And with its sister English gun, my amazing 4 pound Thomas Turner .410. Recently the Field has published an article suggesting Turner was one of only six provincial makers who made their own actions. If this is true it makes this rare long- stocked .410 even more unusual.  I already knew they were specialist makers of lightweight guns, not just .410's. 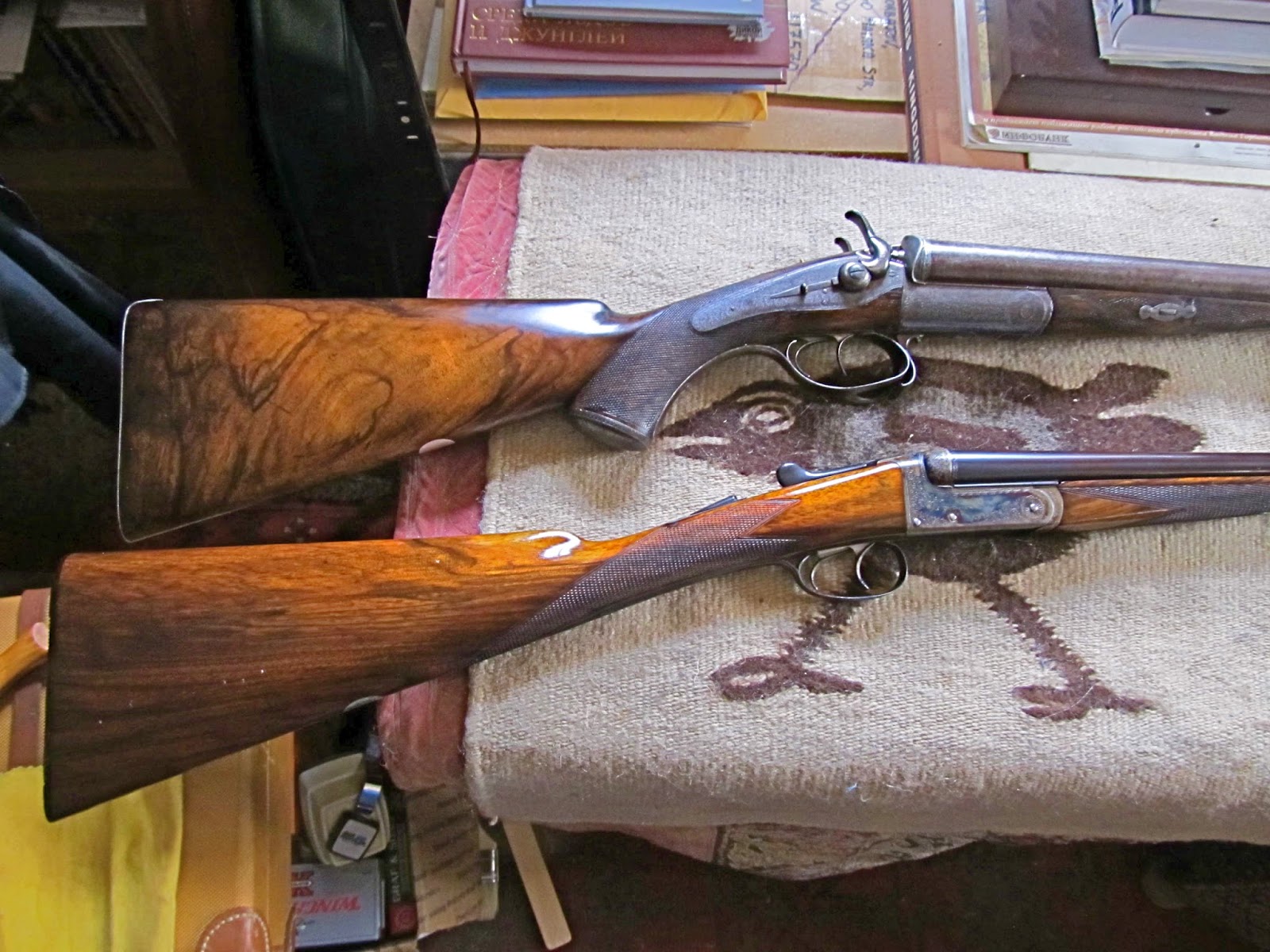 I assume your hammer gun has damascus barrels so I'm guessing the barrels are also sleeved or will be. What length are the chambers? What gauge will it be when you hunt with it? Of course you could leave it black powder and just do a lot of scrubbing at the end of the day.

The only guns I sleeve are hopeless wrecks, and this one isn't. It has 2 1/2 inch chambers, standard English. Nowadays you can buy case lots for less than K Mart shells! I will shoot mostly 7/8 ounce loads of 7's (English) and 6 shot.

Damascus vulnerability has been pretty well debunked by a series of tests over a couple of years at Double Gun Journal. They fed longer than chamber PROOF loads of modern shells through a series of old Damascus wrecks, mostly American standards. NOT ONE had any expansion or rupture. The only gun they blew up was by dropping a 20 shell into the 12 ahead of the chamber, and it blew up a steel barrel too.

You must polish pits to keep cleaning good, and you should check barrel wall thickness, but then no need to avoid Damascus. I have been shooting good Damascus barrels for over 20 years.

one great thing about your blog is I learn something new every time I come here. Who loads/manufactures 2 1/2 in shells? Do you have to buy them online? Is this gun 16 gauge? On a different note I just reclaimed my fathers FN Browning A5 in 12 gauge and his Winchester Model 63 22 that my mother gave him as a wedding present when they married in 42. Anyway it's good to know that if I come across a damascus barreled double in good shape I can buy and shoot it. I've passed on a couple because I didn't think they were safe with modern ammo.

I do generally buy them from mail order and find them online. Two I use are RST (rstshells.com) and Gamebore.