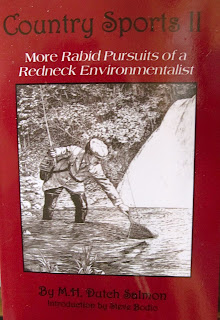 Dutch Salmon has a new collection of outdoor tales: Country Sports II: More Rabid Pursuits of a Redneck Environmentalist.  (Available from High Lonesome Books, PO Box 878, Silver City NM 88062).  I think it is his best and most varied yet. I don't think I can "review" it any better than to use my introduction, which I volunteered- for free, for the record.