The Donner Party and Alferd Packer

One of the great stories of western US history is that of the Donner Party, a wagon train of emigrants bound for California. Their timing for the journey was bad and they were trapped by snow in the Sierras during the winter of 1846-47. They ran out of supplies, couldn't find much game to hunt, and when the survivors were rescued the next spring it came to light that they had resorted to cannibalism to survive.

So it was interesting reading in the LA Times today that an archaeological excavation of a camp occupied by the Donner family that winter failed to find any evidence of human bone in the food remains. Julie Schablitsky and Kelly Dixon presented a paper this week at the annual meeting of the Society for Historical Archaeology giving the results of their excavations at the camp at Alder Creek. It seems that the Donner Party had settled into two different camps after they were stranded, and the Donner family camped with part of the group near Alder Creek.

The researchers found food residue that showed the people were stressed - they ate their pets - but nothing to indicate cannibalism. They are careful to say that this is not absolute proof either way, but descendants of the Donners are claiming vindication as their ancestors reported they had not taken part in cannibalism.

I have posted here before on cannibalism in the prehistoric Southwest, but this reminded me of another tale of 19th century American cannibalism and archaeology less well known than the Donner Party. That is the story of Alferd Packer. 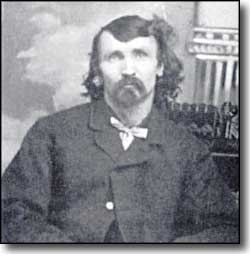 Packer (1842-1907) was a Union Army veteran from Pennsylvania who headed West after the Civil War. In fall of 1873 he was the member of a party of 21 gold prospectors who left Provo, Utah headed for diggings near Gunnison, Colorado. The progress of the party was stalled by winter weather. Despite advice to wait until spring to resume the trip, Packer and five other men pressed on in February, 1874.

Packer straggled in alone to the Los Pinos Indian Agency near Gunnison in April. He told officials there that he and his companions were trapped by snow in the mountains. His five fellow travelers left to hunt for food and never returned. He toughed it out alone and came down from the mountains when he could. Later he ran into some members of the original party of 21 in a bar at Saguache, Colorado. They didn't believe his story and reported him to the authorities. He was arrested and began telling the first of what became many versions of what happened.

When Packer and his party were trapped by snow and ran out of food he did admit to having cannibalized his companions' bodies after their deaths. But at various times he either said that he hadn't killed any of them, or had shot and killed one man in self-defense. He signed a confession in May, 1874, and was jailed in Saguache. The judge who was remanding him for trial is famously said to have stated, "There was only seven Democrats in Hinsdale County and you done et five of them." That month the bodies of the five men were found near what is now Lake City, Colorado (the area is called Cannibal Mesa on USGS maps) with evidence of foul play. The bodies were in bad shape either from cannibalism or scavenging by animals.

Later in May, Packer escaped from jail and was not seen again until discovered living under a alias in Wyoming nine years later. He was returned to Colorado for a sensational trial in 1883. He was found guilty of murder, that was overturned on appeal, and he was convicted of manslaughter in a second trial. Packer was sentenced to 40 years in prison and was paroled after 17 years. He lived the rest of his life quietly near Denver and is buried in a VA cemetery there.

There have always been many questions about Packer. He always maintained he was not a murderer and that he had been forced into a survival cannibalism. He was paroled after a campaign by sympathizers convinced the governor of Colorado that he was likely innocent of murder.

A friend and graduate school colleague of mine, Doug Scott, relocated Packer's camp in the late 1970s when he was BLM district archaeologist for that area. In 1989, the grave where the five bodies were buried was excavated, and the remains subjected to a forensic examination. The results of this were reported by Alison Rautman and Todd Fenton in an article in the April 2005 American Antiquity. 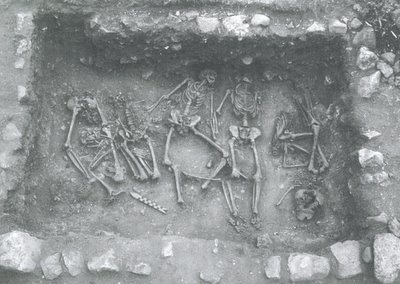 This picture of the excavated bodies comes from their report. Their analysis leaves little doubt that Packer was a murderer. To quote: "...the forensic interpretation of this peri-mortem bone damage on all five skeletons is that the individuals were killed, one after another, by repeated blows to the head with a heavy sharp object such as an axe...Defensive wounds to the arms of three individuals suggest that at least three of the men were conscious during the attack and had attempted to defend themselves." 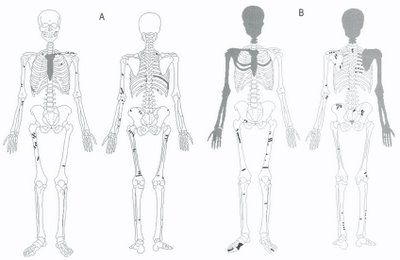 And he did butcher them out. These charts from the Rautman and Fenton report are "cut mark" maps of two of the skeletons. You can see how Packer filleted meat from the arms and thighs.

Alferd Packer has reached a sort of folkloric status in Colorado. At the University of Colorado in Boulder the snack bar in the student union is the "Alferd Packer Grill." When I was in school there they had an Alferd Packer Day in the Grill each spring with poetry contests, eating contests, and songs about his life. They even printed Alferd Packer Day t-shirts with the slogan "Have a Friend for Lunch." I'm told there is a statue of him on campus now. Folk-singer Phil Ochs wrote a song about him. Cannibal! The Musical is a movie based on Packer.

Interesting, isn't it, the strange take our modern culture has on this subject.

Any extant books about the Packer story and it's conclusion, based on your associate's research? I can see some page-turner potential here!

that's really fascinating. But re: Donner party, if the surviving Donners originally insisted that they had not canniballized other members, what was it that made the authorities, and posterity, so sure that they had? Were the other members found all chewed up (by human beings or animals)? Or was it just the most sensational explanation, best for selling newspapers?

As I recall, without looking it up, the contemporary pro-Packer version goes like this:

One of the prospectors killed the others while Packer was away from camp scouting for a way out. When Packer returned, this man came after him, and Packer shot him. A revolver with one chamber discharged was found at the site.

So was there one skeleton without an ax wound? That's what I don't recall. Packer's committing of "survival cannibalism" is still accepted by everyone.

Matt:
None that I have seen - do a sarch and you will see that there are lots of factoids about Packer floating around out there.

Larissa:
The Donners said that people in the other camp were cannibals. That one has not been excavated to my knowledge.

Chas:
You are right about that version. I left it out in interests of space. All 5 were killed by ax blows to head. No evidence of gunshot wounds on any of them.

BTW two archaeologist colleagues from work (they are in other offices of my company)Mike Kelly and Elena Nilsson volunteered time working on this dig. They did not do lab analysis and just found out about this too

Matt, I first read the Packer story as a fascinating digressive chapter in a biography of Chief Ouray ("Ouray: Chief of the Utes" I think; could be wrong. But Ouray's biography is a worthwhile read itself).
Another great Colorado cannibalism story is related in David roberts' "A Newer World: Kit Carson, John C. Fremont and the Claiming of the American West". In a nutshell, Fremont's 4th expedition followed a shady guide into the La Garita Mountains in winter. Things went very badly, and during the struggle to get back to Taos, several men were eaten at several times. Another good read (anything by Roberts comes recommended).

I can't locate Alison Rautman's article in the online databases that I can reach from home, unfortunately. Maybe it's too new.

I did find a piece by Andrew Curry that appeared in Archaeology in 2002 that dealt with the possible shooting. Packer claimed that Shannon Bell was the killer and that he, Packer, shot him in self defense.

Starrs, as noted, disagreed: "Other grisly finds: most of the cut marks were on the victims' backs, possibly implying that the killer
was reluctant to look his friends-cum-food in the face, and dozens of hack marks on the arms and head of the
party's youngest member, indicating a heroic, if futile, struggle. Starrs concluded Packer was the killer, arguing
that an old war wound would have made Bell a bad ax-murderer, unable to overpower the younger Noon. "

"fter years of research, a team of
historians and scientists announced recently that Packer was telling the truth. Using an electron microscope to
analyze soil samples taken from the graves of the victims, Museum of Western Colorado curator and historian
David Bailey says lead fragments found near Bell's bones match samples from a Colt revolver excavated nearby
five decades ago and said to have belonged to Packer. The badly damaged gun, a rusted-out .38 caliber Colt
pistol, was found on Cannibal Mesa near the Lake City massacre site in 1950. Popular with prospectors of the
time, the pistol still had three bullets in its five chambers. "The lead in the gun was unique, and the lead found
under the body was the same type," Bailey says. "We now know [Bell] was shot. It gives a lot of credence to
Packer's story."
Bailey's case rests on what he claims is a bullet hole in Bell's hipbone, though Starrs, whose team took the
photographs Bailey is working from, insists the hole was made by animals gnawing on the bones. "It wasn't a
bullet hole at all--it was a carnivore gnaw mark. It had none of the classic marks of a bullet hole," Starrs scoffs.
"The most likely scenario is that Packer killed all five with an ax. Packer was quite a con artist, and apparently
he's still at it."
But one man's carnivore is another's gun, and Bailey has mustered documentary evidence to show that the hole
in Shannon Bell's hip was put there by a desperate Packer. Trial testimony from a member of the local coroner's
party that first investigated the crime scene noted "a piece of hip bone, with a bullet through it, [that] lay near
one of the bodies; also a pocketbook with a bullet hole through it was found." "

So I'll have to read the American Antiquity piece.

One more Packer T-shirt from when I was in grad school at CU-Boulder, mid-1980s: "Nothin' says lovin' like someone in the oven."

Chas:
From Rautman and Fenton:
"There was no evidence of perimortem gunshot wounds to any of the five individuals. What had previously been reported in the media to be possible gunshot trauma to the pelvic area was, in fact, damage from carnivore activity. The shape and location of large, circular puncture defects in the iliac blades of four individuals (A,B,C, and D) is consistent with bear scavenging."

No mention of lead. But it also appears there were punctures in the hips of four of the five bodies - making it even murkier.