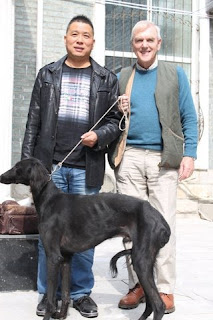 Sir Terence Clark has just returned from China. He writes:

"I was in Shaanxi Province of China in October 2010 with the Xigou (pronounced See-gow) hunters, one of whom had previously asked me whether I thought his hound was a Saluki. After examining a whole range of these hounds, I can only say that superficially they look very like desert bred Salukis of the kind that you find elsewhere in the northern range of Turkey and Iran."

Terence thinks they came to Central Asia from the west, from Persia and Arabia. I rather think they went the other way; I'm not sure the evidence is in yet to prove either of our theories. What is for certain is that they have been in both places a long time! Tomb images and other art places them firmly in western China by AD 700-- see "Prince Xangui's Tomb" where the dog has the local roman nose, about which more in a moment. Terence continues:

"...the Chinese Xigou are quite varied in their appearance. Some have a distinctly banana-shaped nose, but this would seem to go back at least to the 7th century, if the tomb painting of Prince Zhanghuai is accurate. Others have a normal Saluki nose. Some have a roached back, but others a straight topline. Some are very broad across the chest so that the elbows seem to stick out, but most have a normal Saluki front. Most have quite thick ear fringes but only skimpy feathering on the tail, like the Tazys of Central Asia. A few have rather rounded front feet but most have a good long, well-arched Saluki foot. The colours are mainly solid black, white, red with black mask and fringes, grey and dark brindle. I did not see any particoloureds, grizzles or smooths, though I was told a smooth variety existed."

Here is a typical young black pup of the local type. Blacks are rare in the Arab countries but appear sporadically from Turkey east and are apparently common in China. 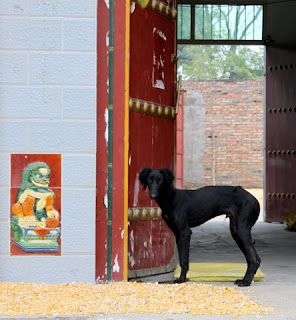 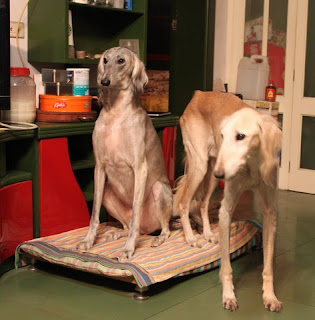 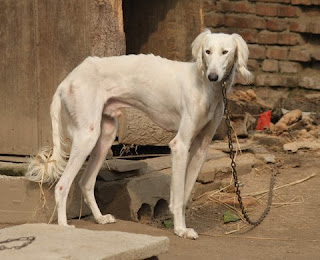 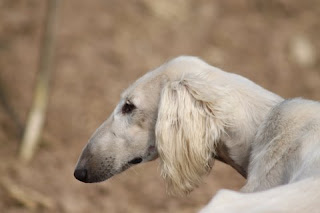 Which contrary to some saluki people has been around a long time. Remember the Prince's tomb, and look at that profile: 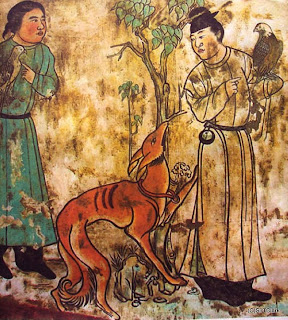 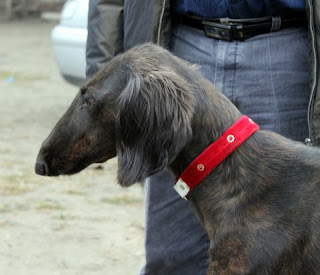 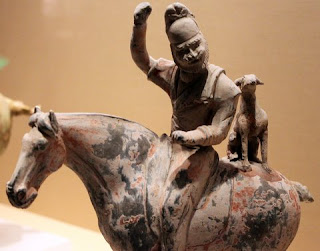 Terence also got to go hunting. "Hunting was a free for all! I saw as many as six or eight run at the same time and the hare, smaller but similar to the European hare, does not have much chance to escape on the flat, sparsely covered cultivated fields."

Hungry cultures are not as "sporting" as ones at play...
Posted by Steve Bodio at Sunday, March 06, 2011

Hungry cultures are not as "sporting" as ones at play...

They also don't bother breeding for completely standardized type, such as all having the same nose, front, coat, or topline...

"Hungry cultures are not as 'sporting' as ones at play..."

I also have a reaction to this statement, Steve. Maybe it's that 'hungry cultures' needs further definition.

'Sporting' is tricky too. Evaluations of that are infamously subjective (as has been said of pornography: one knows it when one sees it).

I don't think it can be said that hunting for food is necessarily less sporting than hunting "for sport," whatever that means. I'm not sure the fact of the food provision has anything at all to do with any form's sporting aspects at all.

It's about one's choices and approach, isn't it?

I didn't see the free-for-all nor know what Terence expected to see in the ratio of hunters to hunted, etc.; but I expect (from experience) that wild hares are hard to catch everywhere, and if I only had dogs to do it with, I'd want a bunch! :-)

My guess is that if the hares were easy, they would have spared some of the dogs and risked no more than necessary to catch what they needed.

I am 100% with LabRat and about 90 with Matt. I agree that ALL hunters find some "sporting" joy & esthetics-- I am both a meat and sport hunter.

But Terence has cited elsewhere how Arabs at least simply give up salukis if they cannot hunt for food. A Chinese farmer to whom meat is something of a luxury may be less punctilious about "rules".

"hungry" cultures .....wow ! Thats a new one to me at least!
Anyway better a "hungry" culture than a culture which hunts for mere sport!
Would like to point out that the "sporting" culture is only for the local elite and force the rest to poach for game

I'd agree-- see my remarks above. They don't need to apologize to anyone. If you know rural New Mexico or where I hunt in Asia my sympathies are obvious!

@ Eva...some caravans have that nose...very few in fact.....a few salukis of the West would also have the same nose if Westerners were not so meticulous of breeding to type which is mostly good. BTW how many Caravan hounds have you seen?