Not all New Mexico hounds are tazi types; more are longdogs (locally more often called "staghounds"), deliberate and intelligently- bred crosses of various sighthound breeds. I have been hoping, and still am, that Clint Chisler would elaborate on the voluntary partnership between Lucy and a free falcon, but meanwhile here is his celebration of a fine dog. 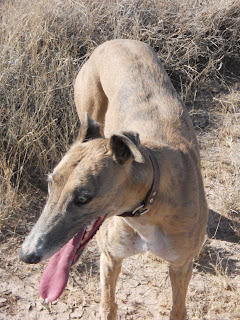 "In the fall of 2007 a good friend of mine and fellow sight hound hunting enthusiast, Bill Bates, and I took a trip to the Estancia Valley. I bought a pup for $45 that day. She was 7 weeks old and one of a dozen very similar looking siblings. I figured I’d get the smallest female since I’m more of a rabbit hunter than a coyote killer. The ranch hand I bought her from asked me, “do ya think that’s too much money?” I quickly replied, “No I’d say someday she’ll be prove to be worth it.” That statement was soon become an understatement. Lucy was a squirrelly little hazel-eyed light brindle staghound. To look at her you might think she was just another greyhound, but her ancestry traces back to indigenous staghound blood lines from the southwestern United States with a little Argentinean Dogo, Pit bull, and who knows what else mixed in.

"Over the years Lucy has been an outstanding hound. From about 6 months of age she could keep up with my older stag/saluki, and improved the older she got. Lucy has taken about a half dozen coyotes to date and I can’t count how many jacks. Ten of those jacks were taken as a team effort with a wild (previously inter-mewed) prairie falcon I had released on the mesa where I did most of my hunting in Los Lunas, NM. The prairie falcon is a story in itself that I hope to write soon. Not many dogs could match her perfect combination of speed and endurance.

"Lucy has endured many injuries that are all too common in the coursing world; broken toe, fence-torn tail that had to be amputated, a concussion from running full speed into a pickup, coyote bites, and too many sutures/staples to be listed. These strong yet delicate dogs age fast, but Lucy has stood the test of time and the rough miles of running across the New Mexico countryside. Her hardened feet have come to accept the sand, rocks, mud, and snow they have been exposed to and punished by. To this day Lucy is still an integral part of my pack.

"A couple of mornings ago I let the dogs out for the day and after I broke a thin layer of ice in the water tub I stood and soaked up a beautiful cream orange and blue sunrise. In the foreground a murder of crows were flying across the landscape. I’m guessing they were going from their nightly roost to a nearby dairy to eat for the day. I looked down and Lucy was right beside me watching the same grand display of nature, and then she looked up at me with those hazel eyes." 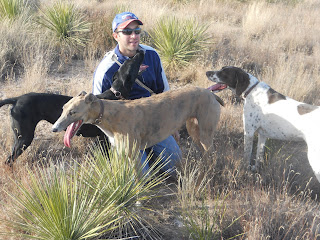 This dog reminds me of the story of the greyhounds that were outcrossed to a bulldog:

I can think of a few examples of pure bred dogs that have kept their hunting ability unaltered through centuries like the podenco ibicenco that hunt in feral packs in the Baleari, the cirneco in Sicily or some borzois in Russia and Ukrain that are still doing their job. Maybe they are not available in the US.

I can think of a few examples of pure bred dogs that have kept their hunting ability unaltered through centuries like the podenco ibicenco that hunt in feral packs in the Baleari, the cirneco in Sicily or some borzois in Russia and Ukrain that are still doing their job. Maybe they are not available in the US.

I know of good working borzois (the McGeehee's hounds-- recent Russian blood) in Idaho, and of course good "country of origin" tazis and salukis. Recently I have seen good galgos in NM.

Most of the other working longdogs I know are crossbred. I don't know of any of the other Iberian or Mediterranean breeds in the US other than possibly show dogs but would be interested in hearing about them!

Ibizan hounds and "Pharaoh" hounds are certainly found in the US as AKC dogs.

There is a podengo medio in the film Zeus and Roxanne.

Absolutely true-- was thinking more of "exotics" and our SW hounds which are pretty exotic to most.

A few good deerhounds too though they tend to be tragically short- lived.

Reminds me of my "Salmon" longdog! Though perhaps not as functional in thick, hilly Eastern forest habitat, my longdog nails squirrels regularly(and delivers them to hand!), and has single-handidly killed several grown raccoons--gamely and in seconds! Many dogs find a grown coon quite a fight--I was very suprised how easily my "Salmon-hound" killed them! He is mostly of greyhound X saluki background, but his father had some "staghound" in him(and a slightly wiry coat), and supposedly a bit of coonhound WAY back there, and WAY WAY back there, a bit of Bouvier Des Flandres, of all things! Yet he looks like an unrefined racetrack or coldblood greyhound--his ma's photo("Cookie") is in Dutch Salmon's "Gazehounds And Coursing" book......And it is a shame more avid hunters actually USING sighthounds have not discovered Azawakhs--a LOT of REAL functional potential there! Such FASCINATING canines!! But the RIDICULOUS pricetags burdening the breed, because of their exotic-rare-dog status, and the fact that most of the people that have and breed them are not hunters, will probably keep this splendid breed type in obscurity. Not too mention their somewhat demanding temperments--their reputations as watch dogs inclined to bite intruders is NOT exagerrated--and not typical of most sighthounds! I loved mine(who joined Allah some time ago), and I LIKED his intolerance of intruders, living isolated in rural Appalachia as I did. Though he didn't take the cold well, he was raring to go even at 100 plus degrees--a true hot desert dog! And I've never seen a gamer sighthound anywhere! The desert Southwest of America would be ideal for Azawakh.....L.B.

I met a few people in New Mexico who have coursed with Azawakhs. I never had a chance to see one run but from what I have been told they have not had much success, certainly not like salukis (or tazis).

Zac-- I think Lane is saying they are good hunters-- not always the same as good coursers.

Yes, Steve, EXACTLY; and excellent potential for(DARE I say it?) crossbreeding for certain characteristics--like Pure-D grit and toughness for one, and intelligence and obediance for another. An example--I was told by my Azawakh's former owner(who GAVE him to me--more concerned about getting the dog a good home than making money--or I would certainly never have been able to afford the typical Azawakh's $1000+ pricetag!) that Azawakh were known for obedience(though not subserviance--obedient to someone they have respect and affection for), and could reliably be called off in the middle of a pursuit!Unheard of among sighthounds, especially! Yeah, sure, I thought; assuming this was just another exagerrated breed myth--but BY GOD(or perhaps I should say Allah!), many was the time(after my adult Azawakh accepted me as his person), I called him off deer and other chases when he was going full tilt--something I've never been able to do with virtually ANY other dog I've had! I was AMAZED! I had a "desert bred" Turkish Saluki as well, and often ran them together, so had some great comparisons, and I can see why, Zac, Azawakh might not compete well in a coursing event--depending on the terrain and habitat. My Saluki left my Azawakh in the dust every time on fairly flat, open ground(not very common in the mountain area I lived at the time--the occaisional riverbottom pasture, perhaps, or recently lumbered field)--but in thicker brush and steeper terrain, the Azawakh was superior--turning and twisting and running uphill much better than the Saluki! And light-years more game--my wonderful gentle Saluki was hesitant to grab nearly everything--just catch up and race alongside or behind it. The Azawakh NEVER hesitated to NAIL whatever it caught! I could see Azawakh being quite useful, functional hunters in thick brush and hot desert, especially--which is the type of habitat a lot of them are used in in the North African Sahel where they originally were developed. Or breed a strain of longdogs with some Azawakh characteristics(Saluki speed and endurance, plus Azawakh grit, gameness and obedience? It would be INCREDIBLE!) And an aside--most "official" coursing events are a far cry from having a dog to help fill the pot! And lure-coursing, especially, tends to PENALIZE the hounds that would be the best, most sensible hunters!(though at least they are purty fun for the dogs participating--better than just trotting about a show ring!...)....L.B.

..And too, regarding further comparisons and Azawakh coursing ability--no, the Azawakh didn't compare with the Saluki in a flat-out run, but it CERTAINLY left my wolf-hybrids, Siberian Huskies, Trailhounds, Catahoula, and Basenjis in the dust(though those tough little Basenjis kept up suprisingly well for their size!)--all these dogs run together in one pack frequently--definetely a superior courser compared to dogs that are not sighthounds. Splendid endurance, too. As far as combining speed and endurance and gameness, my Dutch Salmon longdog is the better of these three sighthounds that I have hunted. But if he had some of the Azawakh temperment, he might be better at nailing visiting Jehovah's Witnesses, as my Azawakh so excelled in.....:D...L.B.

Ha Ha Ha... That's really funny. I've been seriously considering getting and azawakh to course with. I've heard that they are really good at catching rabbits and obedient, just like you said. Right now I've got a few coonhound-mountain cur-basenji mixes that are pretty fun to hunt with, but to catch a hare, I'll need something with more speed, but Azawakhs are hard to find. Maybe I'd be better off with a saluki, or maybe I should get one of these NM running dogs : ) Alex Schubert