I don't want to overwhelm everybody with gun posts, but this is a good one. Prompted by my dream gun post below, John Hill, "Johnny UK" of our comment section, has sent photos of his "one good gun", a product of a lifetime of experimenting and trading. It is a Damon Petrick from Herve Bruchet in France, who also makes Darnes. I'll let him speak:

"I really liked your selection on the Blog, and was going to post a reply, saying that I had now settled on just the one 20G Darne Damon Petrick, with 29 1/2 in Teague Choked barrels.

"It is as slim as a Boss frame, handles like a dream, and will be handed down to son No 1 as a heritage weapon when I depart!! - having enjoyed already 10 years of wonderful ownership - note the MOF signature on the woodcock, underneath, French version of "Italian photographic Engraving ", and, unlike many Belgian scenes, these dogs are real dogs! ,and the birds are flying... also note the wood - oh la la !!"

Apparently Bruchet is soon to come out with a true sidelock. 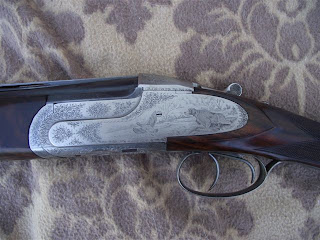 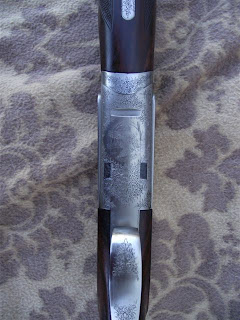 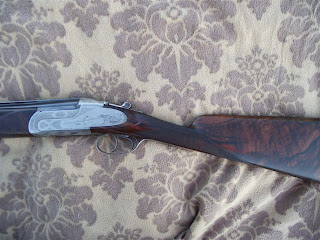 That is a stunning gun. I'm always on the lookout for Petriks and I've never seen one quite like that.
Thanks for sharing