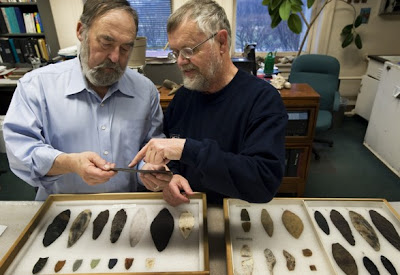 In the last week or so, the UK Independent and the Washington Post have both carried stories about new evidence that might support the trans-atlantic migration theory for peopling of the New World advanced in the 1990s by Dennis Stanford (Smithsonian Institution) and Bruce Bradley (University of Exeter).

I was just looking back and I first posted on their theory almost exactly six years ago. To save myself typing time, I'll just copy the Reader's Digest version of the theory from that post:

"It seems pretty certain that late Pleistocene humans at around 14,000 BP had the boat-building technology to enable them to do limited maritime voyages. .... The most likely boat type is thought to be a kayak or umiaq-like skin boat similar to those used by the ethnographic Inuit.

Stanford and his collaborator Bruce Bradley believe that it would have been possible for Pleistocene people to have crossed the Atlantic in boats during the 14,000 BP period, when we have the first confirmed human presence in the New World.At that time, the polar ice cap extended far to the south of where it is today, and pack ice choked the North Atlantic. Stanford and Bradley theorize that the edge of the ice would have provided a "coastline" stretching from the Bay of Biscay to Labrador. People in boats could have traveled west along the edge of the ice, camping on ice-floes and subsisting on fish and sea mammals that they could hunt in route. Lost seal hunters could thus have found their way to North America."

Previously, their evidence rested on what they see as stylistic similarities between European Solutrean artifacts and Paleoindian blade technology from North America. The new evidence cited in the articles consists of:

- a mammoth tusk and associated blade recovered by a trawler off the Virginia coast dated to 22,000 BP by radiocarbon assay
- several sites in the Chesapeake Bay region where artifact-bearing strata have been indirectly dated to the 20,000 BP time period
- a lithic artifact from a site in Virginia that supposedly has been petrographically "fingerprinted" to a source in France (the Independent mentions this but the WaPo does not)

I like to keep an open mind, but other problems remain. It would appear that any Pleistocene European migrants left no trace linguistically or genetically in Native American populations, where all evidence of that sort seems to point to Asian origins. As Paleoindian expert David Meltzer (who admittedly can be harsh) puts it, “If Solutrean boat people washed up on our shores, they suffered cultural amnesia, genetic amnesia, dental amnesia, linguistic amnesia and skeletal amnesia. Basically, all of the signals are pointing to Asia” {as the origin of the first Americans}.

It'll be fun to watch this play out. As Chas put it to me in an email the other day, the Pleistocene peopling of the New World is turning out to be far more complicated than we thought.

I was wondering why this was all coming out again suddenly, until I saw Stanford and Bradley have a new book coming out on the subject.
Posted by Reid Farmer at Tuesday, March 06, 2012

The first time I heard of the Atlantic migration was on a Doc that compared the pre-clovis points to the ice flow migration. I read the piece in the Indi too, and was puzzled by the lack of a mention of DNA evidence.

Keep us posted with anything you find out - interesting stuff.

Whaaaaa? Nobody is taking Prince Madoc of the Welsh's 1100 migration to America serious anymore? At least we still have the melungeons(sp?) in the Southern Appalachians, of whom DNA tests seem to confirm one of the old legends that they were possibly descendants of shipwrecked Portuguese sailors...L.B.

They are not Portuguese, but they are instead the descendants of the people the English colonists in Maryland, Virginia, and the Carolinas used to do their work for them.

The genetic studies I've seen on Melungeons shows them to be primarily northern European with an admixture of Sub-Saharan Africans and indigenous people, including those from the Caribbean, who were commonly kept as indentured servants on the plantations until African slaves became more established.

I know that evidence about Melungeons isn't as cool as them being Portuguese or Turks, but they actually point to something else rather remarkable.

It's likely that the Melungeons descend from people who were among the earliest indentured servants and proto-slaves in the colonies. And before the institution of slavery was developed, race didn't matter. People intermarried with little concern for color.

When slavery based upon African slaves became established, then we got the race laws, but before that, no one cared.

Well, there you go with the "finality" of DNA research--just depends on which "tests" you read/know about. All the more reason to not automatically accept something because it is a published, prestigious scientific study. The study I read about was very sure the Melungeons had both Portuguese and Spanish(as well as Native American) DNA. So somebody's study is RONG....L.B.

When they actually looked at the y-chromosomes, only a tiny percentage would have corresponded with Portuguse DNA. The mitochondrial DNA, if I remember correctly, corresponded almost entirely to Sub-Saharan Africas.

Keep in mind that many slaves were brought to the United States were brought from Angola, where the Portuguese had a monopoly on the slave trade there, and the Portuguese were among the main slave traders in the world during the early days of English colonization of the New World. They were running plantation slavery in the Azores and Brazil long before they were doing in what became the American South.

I wouldn't be surprised if slaves of mixed Portuguese and African descent were traded into the United States from Brazil. Lots of slaveholders in Brazil were Sephardic Jews, who had fled persecution from the Inquisition.
That's one way you can get records of "Portuguese people" in the southern Applachians.

But the scenario laid about by Brent Kennedy and other pseudo-historians isn't really supported by the evidence I've seen.

BTW, Thomas Jefferson's y-chromosome came from the Middle East-- most likely entering into his Anglo-Welsh ancestors from the Phoenicians.

But he's really not that unusual.

If you're of European ancestry, you're going to find all sorts of weird things in your DNA that you didn't expect. The Roman Empire left behind a legion of Sub-Saharan Africans in Black Forest, where they married the local women. It is believed that lots of Europeans, including Germans, have African ancestry. You know that pasty white British actor like Peter Ustinov couldn't be of African descent, right? Well, it turns out that his German/Russian ancestors are partially descend from Ethiopian nobility. Even Hitler had some African ancestry-- probably related to Berbers from North Africa.

I've not seen anything in the Melungeon research that takes this into account.

Most of these researchers at least partially assume that white people came to this continent as a "pure" race, when white people have never been "pure." Actually, none of the races have.

All of this should show that racism is beyond stupid. If you hate someone of a different race, you can actually be hating your own ancestors, your own blood.

I don't think the Melungeon researchers have really thought some of their analysis through. And some of the historical claims they make are pretty hard to confirm and sound really, really fanciful.

I think this quote from the Jefferson article sums it up much better:

"When we look closely at large collections of British Y chromosomes we find surprises, like this rare K2 lineage, and the African chromosome that we recently found in a Yorkshireman. These exotic chromosomes remind us of the complexity of British history and prehistory."

.....since I haven't looked up anything recently, I thought I'd Google the Melungeons(I got my former information out of an old- fashioned BOOK)and update myself--indeed the Melungeons ARE "tri-racial isolates"(whatever the heck THAT means), Retrieverman, but, part of that various racial ancestry INCLUDES Spanish and Portuguese! And this could well have come from early, early Spanish/Portuguese explorers, some of which were in Western North Carolina and Eastern Tennessee(Melungeon territory) DECADES before any English settlements--even before the famous "Lost Colony" (which is another favorite romantic pet theory as to Melungeon ancestry--the descendents of survivors of the Lost Colony intermarrying among the Natives). These early early Spanish settlements are little known to many historians--one of the forts built in Western N. C. was only rediscovered in the 1980's. Artifacts from it have positively identified it. Juan Pardo, who established the fort(San Juan), also led other expeditions and established other forts in the area. They failed ultimetely, but there was much interchange between these Spanish and the natives, and many believe this was the origin of the Melungeons--long, long before English indentured servants were slipping off from their masters.....L.B.

Actually, Meltzer simplifies things too much, as it typical of academics who want to paint their own narrow visions, but with broad brush strokes.

Solid mitochondrial DNA data has found that 'X' chromosones, entirely absent from siberian genomes but common in european genomes, has been found in portions of Iroquois populations in the lower Great Lakes region. I believe that the Lower Great Lakes and St. Lawrence valley region was the first area colonized following the early trans-Atlantic migrations, which would explain the findings of the 'X' markers in native genomes of this region.