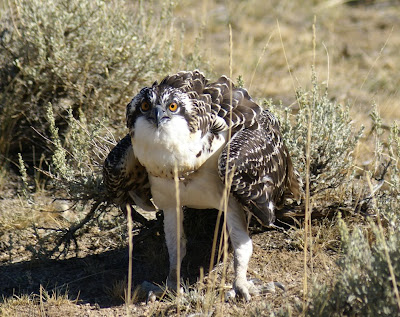 I’ve been trying to keep an eye on the rescued juvenile osprey. It was great to see him sitting upright in the nest the day after his ordeal, but his sibling has been doing plenty of flying while our rescuee stays put. Yesterday afternoon I saw him on the pole near the nesting platform, but I had a hunch something wasn’t right. It’s an odd place for him to be - near and below the nesting platform. If he had tried to fly but had a problem, it would be a logical place to land.

I waited until this morning to go back and check on the osprey family, and was surprised to see the rescuee wasn’t still on the short pole. Sibling and mother were on the nesting platform, but took to the air when I arrived. I soon found the rescuee, on the ground underneath the platform. When I approached, the bird didn’t fly. I got within about eight feet, and decided he must have been hurt more than anyone had thought. He could spread his wings, but was unsteady on his feet.

I backed off and called the Wyoming Game and Fish, asking them to send someone out to get the injured bird. One of my favorite WG&F guys, Ken Mills (who usually deals with wolves) was in the office when I called, so he came down to see what he could do. Ken walked right up to the bird and gently picked him up, grasping him firmly next to his body. 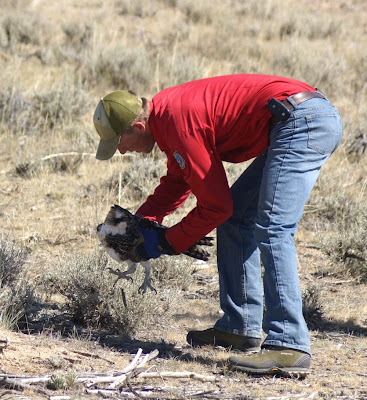 Although Ken had brought a cage, we stuffed the osprey into the arm of a sweatshirt and Ken put him in the cab of the truck next to him for the ride to the vet’s office in Pinedale. After a thorough exam, the vet determined nothing was broken, that the bird was still weak and trying to recover from its traumatic ordeal. Ken returned the raptor to the ground under the nesting platform late in the afternoon, much to the relief of its nervous mother. Hopefully she'll keep feeding him on the ground until he is able to fly back to the platform. We'll watch out for him as we can. 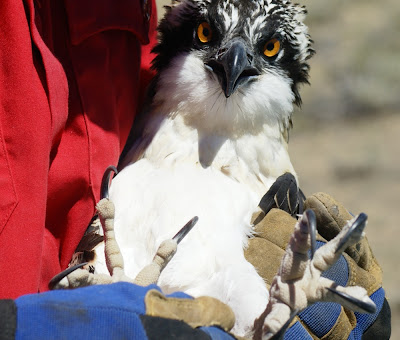 As for my other rescued animal, I’ve decided to name the dog Evita. She’s still a very ill animal, but she wags her tail at us, loudly guards her kennel, and has fallen madly in love with Jim. Jim’s the guy who has to put those pills down her throat at least twice a day (I do the mid-day dose) but he also rolls around on the ground petting her. They have a competition as to which one can melt more closely into the ground in submission, which seems to tickle her.

I took Evita out of the kennel for a walk this morning, but she was uncomfortable and didn’t want to go very far. At least she found a tasty bone for me to carry back to her kennel. I think we’ve got a long, slow recovery process to get this sweet girl back to a full life. That's okay, because we're in no hurry here on the ranch. Our schedule is the one set by nature.
Posted by Cat Urbigkit at Friday, August 13, 2010

Email ThisBlogThis!Share to TwitterShare to FacebookShare to Pinterest
Labels: osprey

Funny, that's just how we pick up the chickens when we need to handle them.

Evita's a lucky girl. She didn't just find a kind place to heal in, it looks like she's found a home. Congratulations to you both.

Glad to hear you're looking out for the osprey, and that his condition is not worse. Beautiful bird!

The osprey may have suffered from a condition called 'captive miopathy(sp)". This when and animal struggles when being restrained or held. The movement from the struggling builds up lactic acid in the muscles and can be fatal. This is what muscle soreness is the next day after exercising. What happens when an animal dies of 'stress' Dr. Redig at the University of Minnesota Raptor Center wrote an article on this condition in one of the Hawk Chalks, I just don't remember which one. I personally think that the osprey should go to a competent rehabber that can test the lactic acid levels and other stress factors in the blood of the bird. (Possibly even asper taking hold from the stress it went through). It would probably take only about a week for the bird to get better and can be returned to the nest. I found an article which is posted on my blog: www.seeaperegrinethankafalconer.blogspotcom Scroll down to see the article on falconry techniques help the survival of raptorial birds. It was a study done in Australia. They tested lactic acid levels in the subject birds. My best for you rescue dog and for the osprey.