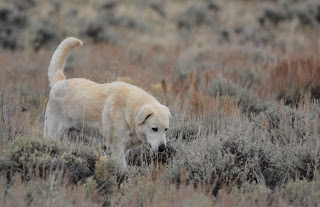 The last few years, we’ve been working Old Mama into retirement. She’s a fine old dog that has traveled many, many miles accompanying her flocks from the low desert to the high mountains each year. We gradually placed her with flocks following shorter trails, and finally stopped allowing her to trail to winter range a few years ago. She’s adapted beautifully to every change; so long as she’s with sheep, she’s content.

Every day she cheerfully sticks her tail straight up into the air and trots off to lead the flock in the day’s grazing. Her face and body carry many scars of war, proof of her unwillingness to back down from a fight with any predator.

Yesterday was the start of a new stage of retirement, as we placed Old Mama into a large pen with orphan lambs that were born this spring. She’s healed up from her most recent battle with wolves, and is in great physical condition, but her teeth are worn with age so she can no longer defend herself. It’s something that she doesn’t understand, as she regularly sounds the alarm and charges out with the other guardians to face danger.

The last few months we’ve had our hands full with wolf problems, so we’ve been night-penning the sheep, and Old Mama is usually the last to enter the pen, following her flock into safety. But when she entered the pen last night, I slipped a leash over her head and diverted her into an adjacent pen, where she could be with smaller lambs. Old Mama was happy to spend time with these youngsters, but when she watched me let her flock out of the neighboring pen at daylight this morning, she stood expectantly at the gate, waiting for me to let her out. But I didn’t. She would no longer be their leader.

With wolves frequently coming so close to the house, I’m afraid we may be on the verge of a major canid brawl. Predictably, Old Mama would rise to the challenge, and would give her life in the process. We’re trying to lessen the risk of that happening.

We had hoped to stop night-penning the sheep as soon as we start winter feeding, probably around the first of December. Instead of ranging out to graze, our providing lines of alfalfa-grass hay near the house will keep the flock close by. But our discovery of wolf tracks within a quarter-mile of the house has cancelled that plan. We’ll be night penning until we can get these particular problem wolves eliminated.

Perhaps during the day Old Mama and her lambs can rejoin the flock as it feeds on hay near the house, and accompany the flock back into the pens at night. Perhaps my indulging in the desires of an old dog will lead to her demise. While I fear for her, far be it for me to deny an old dog her last wish.

She sounds like a wonderful dog. Glad that she can still have a useful role in her aging years.

Bless you for recognizing that her happiness doesn't reside in longevity at the expense of doing her job and being a "contributing member" of her pack! More people should realize it also applies to people in society.

To die happy and content for most of my days, even if a brief time of pain and agony is experienced at the end, is a life well lived for me. I am in my late 40s and pray i have years left to love, experience and truly love, but i have instructed my family that suffering is relative and pain is ok as long as the days aren’t spent wasting away. I avoid much of modern medical care and prefer my home and my small “range”. I cant answer for your precious old Mama, but I suspect your good clearly good communication with her will give you all the answers you need in time. She will let you know, and you already know your blessings. I enjoy your writing. Please don’t ever stop. Thank you!

Wonderful writing, Cat. Is it better to die doing her job, or of a broken heart, watching others do it for her? Not an easy question, and the answer is different for different people. We make a cruel bargain with fate when we love our dogs, for we know from the start that they will not be with us very long.

I still have two old huskies from my last sleddog team, one is 12, the other 13. And they still SCREAM with excitement and anticipation if they hear me moving the old dog cart in my garage! I cannot even move it a foot without them hearing it--even awakening from a deep sleep! But they have been "retired" from harness work for some years now--they would KILL themselves otherwise! I try to make it up to them with lots of treats and affection, which they appreciate, but will never really take the place of a day's "work" in the team......L.B.