We've noticed that our western Wyoming jackrabbit population has crashed in the last few years, and that makes us wonder about cohabitating wildlife and livestock species, and what the impact will be to those animals.

With so few jacks last winter, our wintering golden eagles didn't stick around long because there was little for them to eat. I had heard that when the jackrabbit population crashes, livestock depredations increase. That certainly seems to be the case this spring.

The Farson farm community south of us is field after field of rich alfalfa, and during the peak of the jackrabbit population, it's where I go to photograph large groups of jacks as they congregate and spar together. Now it's unusual to see even a single jackrabbit in the valley. But within the last week or so, there have been at least 13 newborn calves killed by coyotes. With their major prey base unavailable, the coyotes have turned to calves. Both the photos with this post were taken around Farson, just a few miles from each other. The jackrabbit congregation was taken in 2008, when the population was near its peak. The coyote in the image is typical for this area.

We are due to start lambing in about two weeks, so in preparation for that, I've had an aerial gunner flying our lambing ground and shooting coyotes from that range. Our dogs have been working overtime to keep the sheep protected, and have been successful in doing it, but I'm not willing to have my lambs start getting killed before I do something. On Friday, while the airplane was working our lambing pasture, Jim took Hud the herding dog with him to another pasture just to the north. Jim stood in the middle of the dry irrigation ditch and blew on a jackrabbit-in-distress mouth call, while Hud dashed around in the sagebrush nearby. The first animal to respond to the call was a curious doe pronghorn antelope that took a steady look at Jim and walked away. The next responder was a coyote that keyed on oblivious Hud and was racing for him when Jim shot the coyote in its tracks.

Before we started gunning coyotes in the last month or so, we had coyotes coming along our back fence line during the day, in the hay meadow across the highway, and even down at the end of our driveway. Two of the guardian dogs have been working themselves ragged at night in chasing the coyotes, but they are getting so tired and sore-footed they aren't able to catch and kill the problem coyotes at this point. Fortunately, the oldest and wisest of the guardians is Luv's Girl, who always remains with the sheep while the others chase the coyotes. She knows that her time is better spent amid the herd. Between the dogs and the three burros, the sheep are well-protected, but that's no guarantee that a predator won't end up having some success. It's our job to try and prohibit that, but this year we may have our hands full.

Sometimes the worst predator problem we have comes from one of the smallest predators - the red fox. We have one on our place this year that Rena spends far too much time and energy chasing. The little bugger is terribly fast, and there is no way that big dog is ever going to catch it. The fox is no danger to our adult sheep, but to baby lambs, that's another story. A mama fox feeding pups at a den site can be one clever lamb-snatcher. 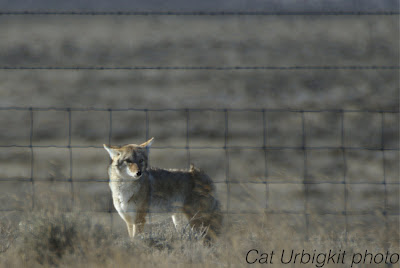 Do you ever have problems with golden eagles depredating your lambs? Thanks.
Paul

We haven't had problems with goldens, although some of our neighboring sheep producers have.

Hi Cat,
Last year I had problems with an eagle, coyotes and, the absolute worst, ravens. I am not looking forward to this season at all.
Clark

Here on the Sacramento Delta, you can hear the predator/prey cycle. The coyotes howl closer and closer to town as the rabbits and ground squirrel numbers diminish. Soon, folks start losing cats...

I hope you weather the cycle well.

We've noticed, anecdotally, a general decrease in jackrabbit numbers through the years. Does anybody out there in internet-land know of any studies on jack numbers?

I don't know about jackrabbits, but I would assume they "cycle" like cottontails and snowshoe hares--I believe the snowshoes are affected by sunspots(according to at least one study I read!)--cottontails can be various things. We have been having bumper populations of cottontails around where I live the last coupla years(midstate N. C.)

As recently as five years ago cottontails were a common sight in my suburban neighborhood. Not anymore, in fact I don't think I've seen any in a year or even longer. There haven't been any major land developments that might have caused habitat loss.